Our friends in the U.S. have long had YouTube Red, which a subscription service which offered videos from major networks and other originals without ads. YouTube has announced this evening YouTube Red is now becoming YouTube Premium—and it’ll soon launch in Canada (!).

The new Premium service will “roll out soon” in existing YouTube Premium markets of the U.S., Australia, New Zealand, Mexico and South Korea.

But new markets are “coming soon”, which includes Canada, along with Austria, Denmark, Finland, France, Germany, Ireland, Italy, Norway, Russia, Spain, Sweden, Switzerland, and the United Kingdom. YouTube says they look forward to more expansion throughout this year and beyond.

Update 05/17: A YouTube spokesperson confirmed Canadian pricing to iPhone in Canada via email, noting “pricing for Canada is the same as the US, but in CAD – so it will be $9.99 CAD for Music, $11.99 CAD for Premium.” 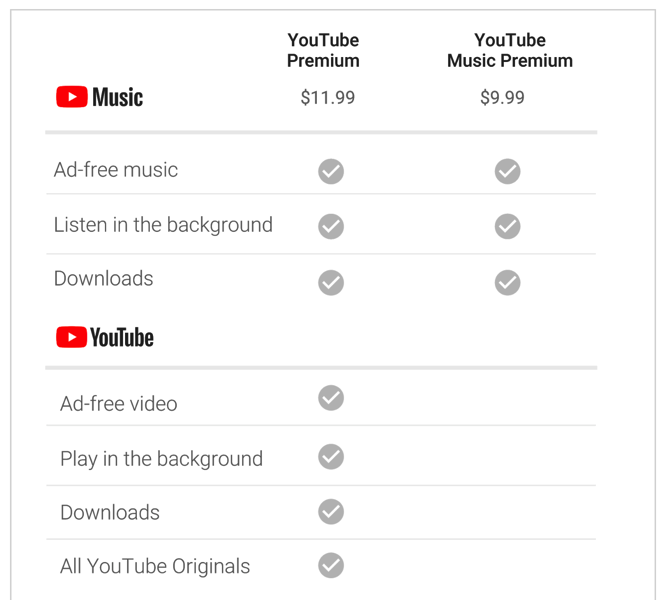 YouTube Premium is geared towards ‘cord cutters’, as many now have streaming options aside from traditional cable TV.

The days of jumping back and forth between multiple music apps and YouTube are over. Whether you want to listen, watch or discover, it’s all here. YouTube Music is a new music streaming service made for music: official songs, albums, thousands of playlists and artist radio plus YouTube’s tremendous catalog of remixes, live performances, covers and music videos that you can’t find anywhere else – all simply organized and personalized. For the first time, all the ways music moves you can be found in one place.

There will be a new YouTube Music app, which will feature a personalized home screen which “dynamically adapts to provide recommendations based on people’s listening history, where they are and what they’re doing.” YouTube gives the example of if you’re at the airport, YouTube Music will suggest playlists to relax you, or if you’re at the gym, it’ll suggest high tempo beats.

If you’re a Google Play Music subscriber, Google says “you get a YouTube Music Premium membership as part of your subscription each month.”

Existing YouTube Red markets such as the U.S., Australia, New Zealand, Mexico and South Korea will see YouTube Music launch on May 22nd.

Will you be subscribing to YouTube Premium when it launches in Canada? . Pricing in Canada will be the same as the USA, but in Canadian dollars, confirms YouTube Canada.

As for what networks will be included in the service here, we’ll have to wait and find out.