My new 13-inch MacBook Pro with Touch Bar (Space Grey; 16GB RAM upgrade) wasn’t supposed to arrive until today, but UPS came through and delivered it late yesterday evening (it arrived alongside my Apple USB-C to USB-A #dongle).

For those following closely, I’ve been using a 2012 MacBook Air with 8GB of RAM for the past four years. I never did upgrade to a Retina display MacBook because I was one of “those” people holding out for a 13-inch MacBook Air with Retina. That never came, but with the latest 13-inch MacBook Pro, it’s safe to say my wish has partially come true, albeit in a more expensive package.

For those following us on Periscope, you probably saw our quick unboxing last night. Here are some nitty gritty unboxing pictures taken with our iPhone 7 Plus, which we will then follow with our quick initial thoughts.

The MacBook Pro comes wrapped in plastic, which we removed for this photo: 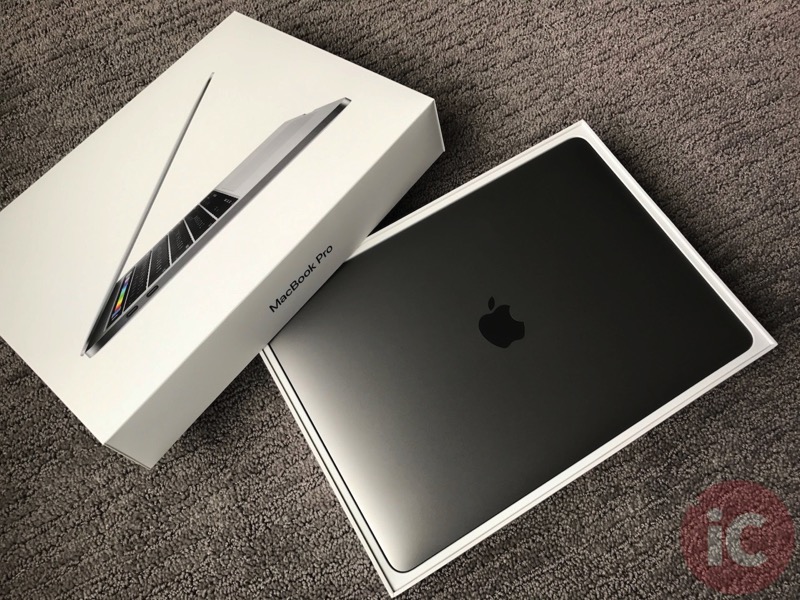 There’s a piece of light paper resting atop the keyboard as always, while in the box you’ll get your charging adapter plus USB-C cable (which was neatly coiled together until I took it apart last night to charge the MacBook Pro; note to self: Foxconn would fire my ass if I worked in the cord-coiling department).

Apple this year decided to not include a power adapter extension cable like we’ve seen in the past, instead making customers pay $25 CAD for it. Come on Apple, I just spent nearly three grand on this machine. 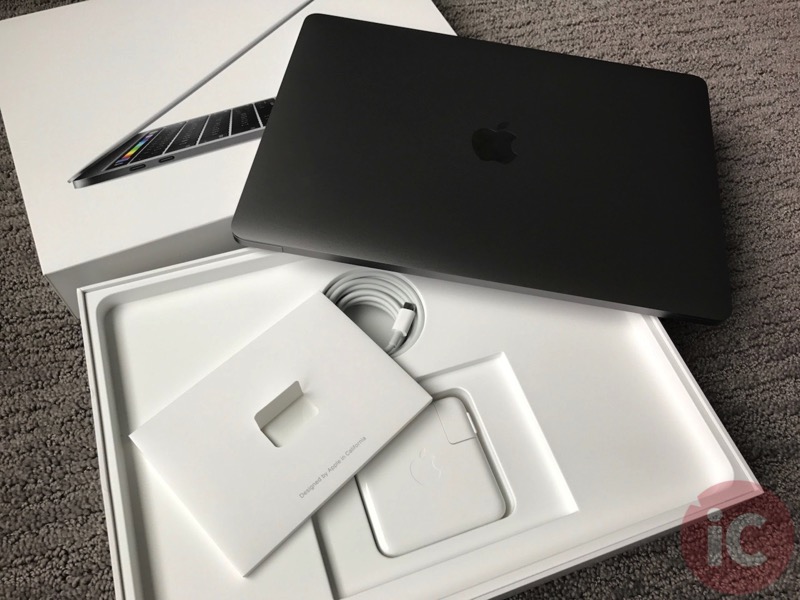 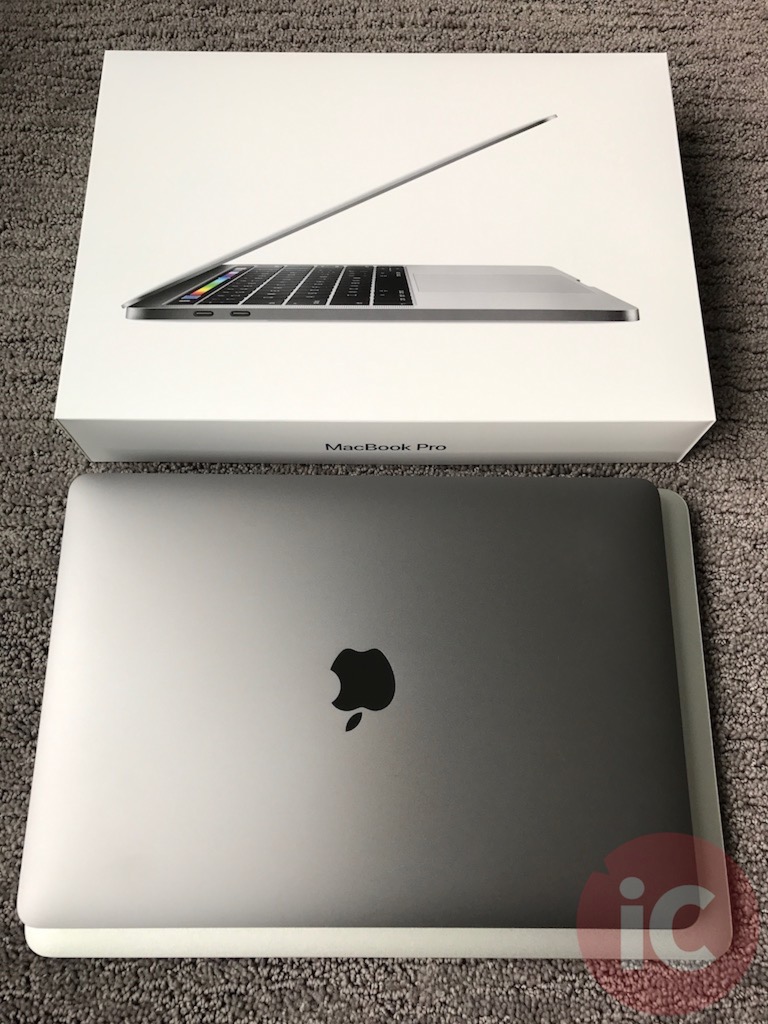 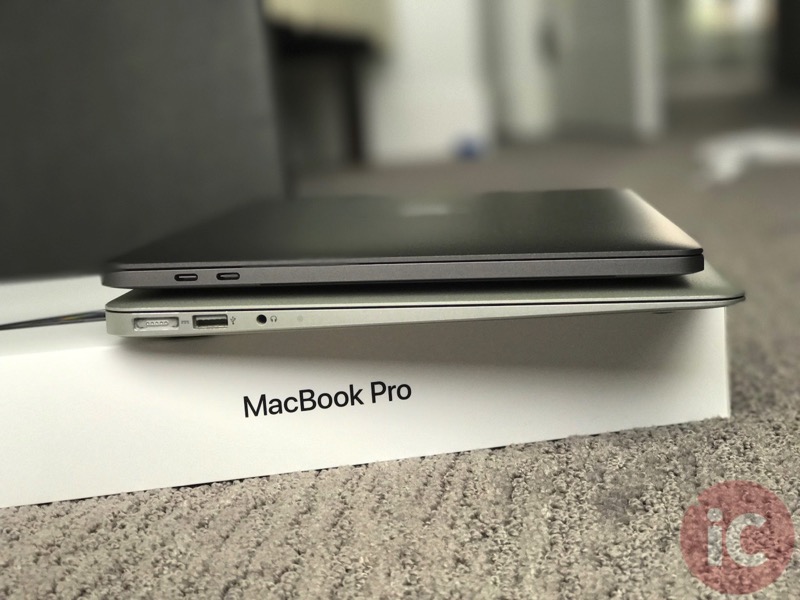 The bezels are so much slimmer which has made this machine much smaller than before. Look at the size of that track pad: 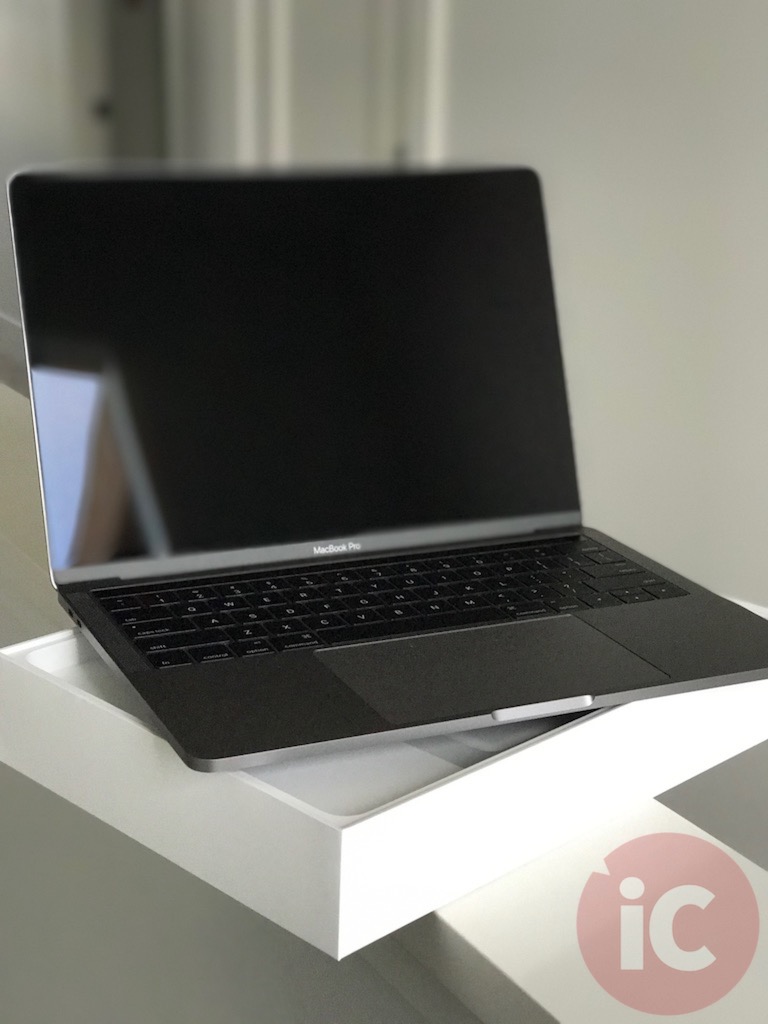 When the MacBook Pro is off, the Touch Bar just sits there as a glossy strip: 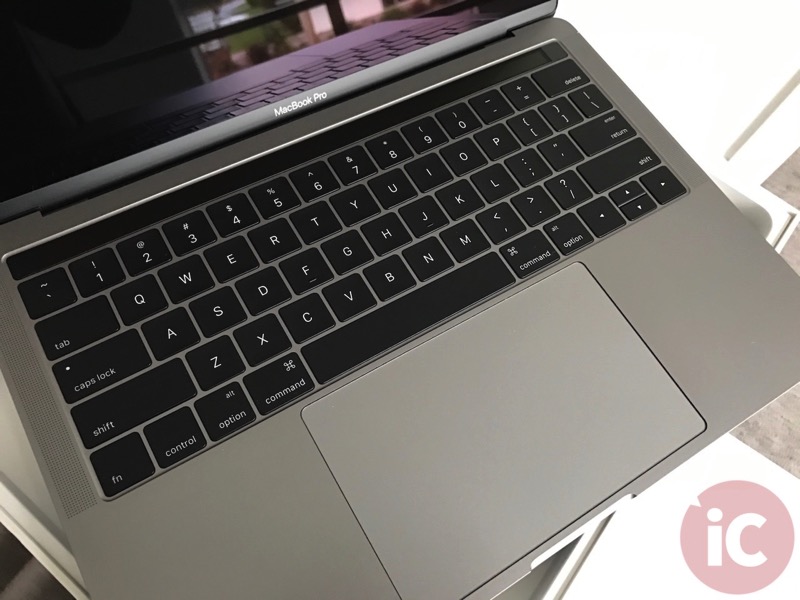 Let’s dive into some quick initial impressions of using this machine for less than 24 hours, shall we?

This MacBook Pro feels really well built, with its sharp edges and round corners. It feels really Apple nice and solid in the hands when you’re carrying it. I’m going to eventually get some sort of clear skin to slap onto the top and bottom of the machine, like I did with my old MacBook Air.

I’ve been slumming it with a non-Retina display since 2012—why did I wait this long? This display supports a wide colour gamut which means iPhone 7 Plus photos really pop on the brighter display which has a higher contrast as well.

I’ve heard a lot of mixed reviews on this new keyboard, which sports a second generation butterfly mechanism first utilized in the 12-inch MacBook. My take? I like it compared to my 2012 MacBook Air keyboard. I find myself typing faster and more accurately with this keyboard. It does have a more “clicky” sound but for the most part, I think it’s great.

The buttons are larger and closer together than compared to my old MacBook Air and it’s interesting have full-sized keys for the left and right arrows. When typing, keys aren’t as ‘springy’ but rather come to a full stop when pressed. It appears this makes typing better for me.

The speakers are loud enough to fill a room and are a massive improvement coming from my old Air. They seem to benefit from reflecting sound from underneath off your desk or table. It’s definitely an improvement and there is actually some bass and music sounds better.

I had concerns about the larger track pad accidentally jumping my cursor whenever the bottom of my palms graced the sides. But I haven’t had one problem with that so far. The haptic track pad has two stages of pressure—one for a light tap and a harder force touch will highlight words and launch the dictionary, for example.

This is the biggest feature of the new MacBook Pro, as Apple’s answer to change and improve our workflows depending on which app we’re using. Upon turning the MacBook Pro on, I had to keep reminding myself to look down at the Touch Bar to take advantage of what was showing on the slim touchscreen display (which would greatly benefit from haptic feedback in the future).

You never realize how much ‘time’ it can take to move your finger to the track pad, then navigate the cursor to a search field or bookmark. With Touch Bar, these shortcuts are now right above the keyboard, so with Safari it’s really easy to jump back to my Gmail tab with one tap (but there’s no way to access pinned tabs without the track pad?). 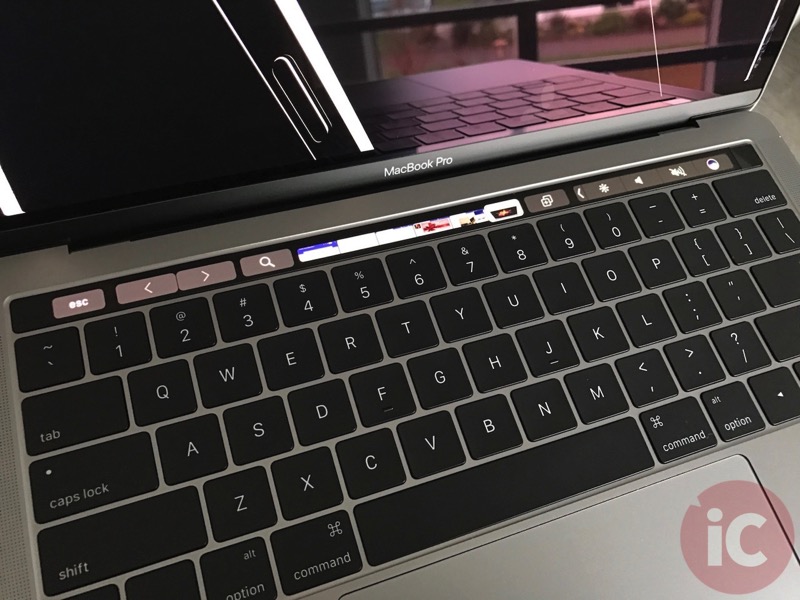 Using the Touch Bar is fun. It’s quick and easy to find an emoji for iMessage, while controlling brightness, volume and more is simple to access in the top right. You can also customize the Touch Bar, but I’d like to see more support from third party apps such as Chrome. I rarely use the constant auto correct suggestions though. For now, Touch Bar actually has been pretty handy, as long as you remember it’s there.

One major addition to the Touch Bar that sealed the deal for this major purchase was the addition of Touch ID. This is a long time coming for Mac users. After using Touch ID to login to the Mac, unlock 1Password, authorize app installs, iTunes and Apple Pay is just frickin’ amazing. If you have doubts about a Touch Bar MacBook Pro, getting Touch ID alone for the upgrade is priceless. Trust me. 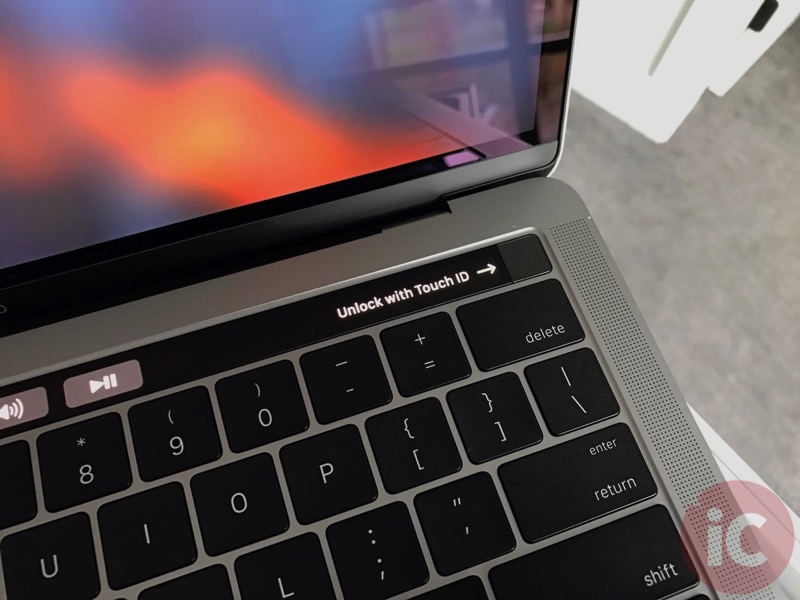 As for battery life, it’s too early to tell if I’m going to get the 10 hours Apple states. In just over two hours at about 80% brightness, with Safari open and a few other apps (Photos, Messages, iTunes, Deliveries, MarsEdit, Twitter, Skype, Notes, Numbers), battery life is at 64%. The system feels cool to the touch right now and is very comfortable to type on (as it should be, since I’m not pushing it hard).

I’m going to miss MagSafe, as I’m sure our toddler running around here is going to have some fun with USB-C as our charging port (like Casey’s dramatic demonstration!). Also, with MagSafe there was a tiny green/amber LED to show your Mac was charging. Those days are gone. What you have now is an audible tone, the same sound you hear when you plug your iPhone in to charge.

Since USB-C is the future, it’s not quite here today. So this means how we roll at the moment is #donglelife. Below are pics of Apple’s Thunderbolt 3 to Thunderbolt 2 adapter, and their USB-C to USB adapter. If you’re getting a new MacBook Pro, you’ll need to shell out extra. Good thing Apple has dropped prices by 25% until December 31, 2016, so jump on this discount while it’s here. 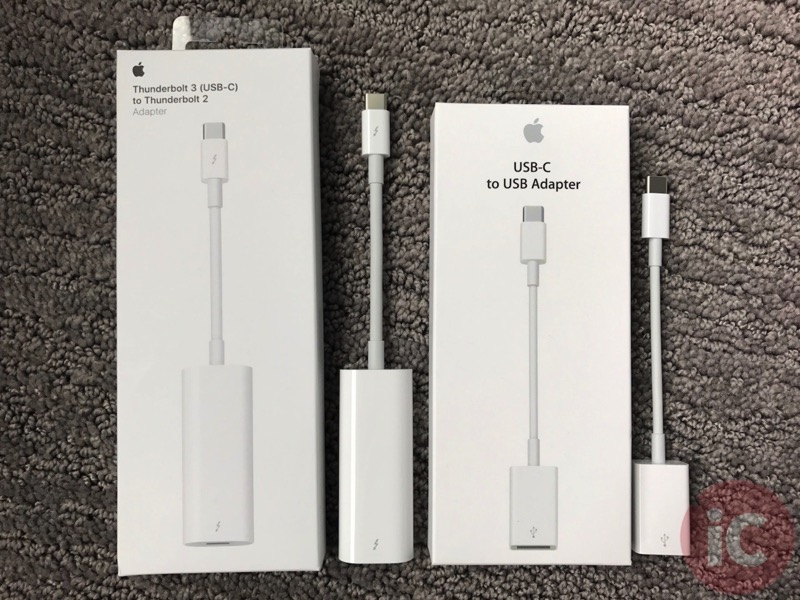 We also purchased Satechi’s Type-C USB 3.0 hub ($67; meant for 12-inch MacBook) which has a combo 3-in-1 for USB, microSD and SD, plus a USB-C charging pass through port.

It works as advertised but the problem is it doesn’t sit flush to your desk or table, since it’s meant for a thinner MacBook. It’ll do the job in mean time, but a version for the 13-inch MacBook Pro would be much better. Since there’s a gap, I feel like there’s a good chance I could warp the connector on both the hub and my MacBook. 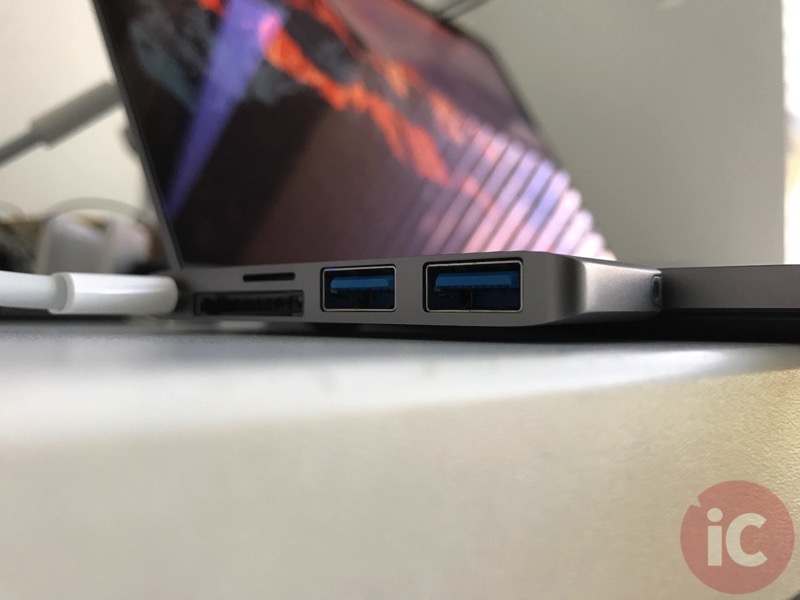 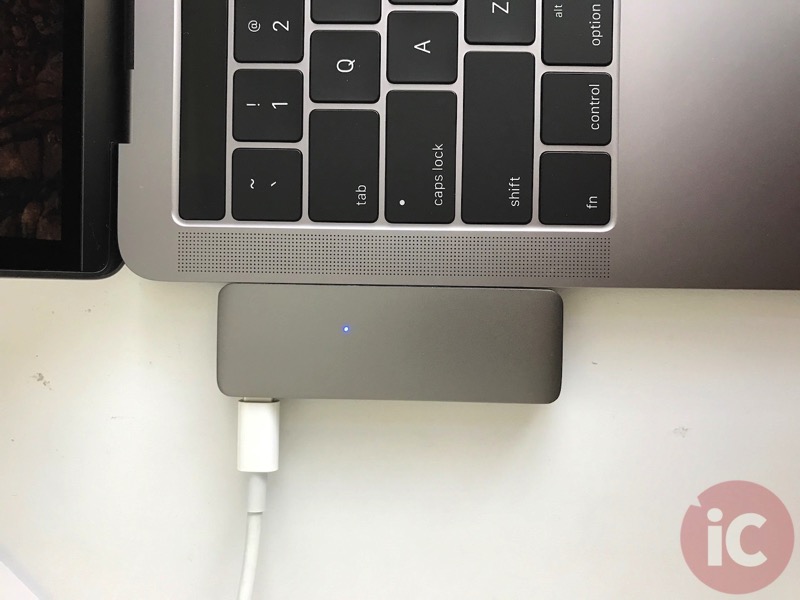 I won’t be able to upgrade RAM, the SSD or anything else myself, but this new Mac should last a long time. As for my old Air? It’s now going to be a dedicated machine to Zwift in the garage and backup Mac.

How does it feel to shell out your ‘life savings’ on a 13-inch MacBook Pro with Touch Bar? So far in my first 12 hours with this machine, pretty good. Maybe that’s because I’m coming from an older 2012 MacBook Air, but for the most part this Mac is a joy to use, it’s fast, and the design and build quality is second to none.

How are you liking your new MacBook Pro with Touch Bar?