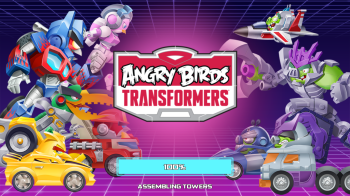 Rovio has done it again. It has taken its iconic Angry Birds game and refreshed it. This time meshing it with another iconic brand – the Transformers. Angry Birds Transformers is now available for download on the App Store worldwide, although if you are Canadian, you’ve been enjoying this game for a couple of weeks now. Canada was part of the soft launch.

I’ve been enjoying this game for a couple of weeks, so here is my full review of what’s sure to be another huge hit for the Angry Birds franchise.

While this game features the iconic birds and pigs that everyone knows, this version is a far cry from the original formula of launching birds at pigs and structures. Angry Birds Transformers is a side scrolling game where you fire your weapons at the pigs and structures instead. It can take a few minutes to adjust to the gameplay, but it’s really simple to master. While it is a side scrolling game, you actually don’t control the characters movement very much. They run independently. And what would a Transformers game be without being able to transform. Once unlocked, you can transform and move faster through the level – but you can only stay transformed for a short amount of time.

Each character has its own unique weapon that will deal various degrees of damage to the enemy pigs and the structures. As you progress you’ll rescue other Transformers that you’ll then be able to play as. Sadly you can’t choose which Transformer you want to use for any given level. As you move through the levels, the enemy pigs will fire back at you, and you will lose health. You can also upgrade your Transformers using the coins and gems you collect or buy along the way. 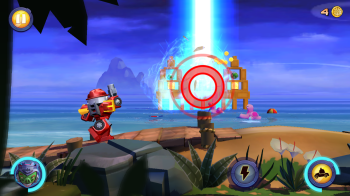 Yes, as you’d expect from a free big name game, you can use real money to help you along the way. This can upgrade your Transformer faster, heal them faster, or even allow you to advance to a new level faster. At the start of the game you will find you’re waiting to play for periods of time. This is an issue I’ve had with other freemium games, but there’s no point ranting about it again. It is what it is. If you want to move along faster you’ll be paying for it.

Angry Birds Transformers also features co-op gameplay. You’ll eventually be able to call in help from a random player or from a friend who has the game and you’ve connected with via Facebook. For a brief amount of time another Transformer will join you in a level and help you blast the pigs. Your friends won’t be able to control their Transformers, but if you pass the level, you can thank them and they’ll receive bonuses.

Sadly, Angry Birds Transformers does away with the 3-Star system at the end of a level. Instead you just find out how many pigs you were able to kill, and how many coins you collected. There isn’t even an indication if you managed to kill all the pigs in a level or not. You also can’t go back and retry a level. While you will eventually go back to certain levels, each time they will be slightly different and more challenging.

Overall I really like Angry Birds Transformers. I’m a huge Transformers fan and this is a nice mesh between the two. It’s different enough that it feels fresh, while still retaining some of the Angry Birds nostalgia that’s made it a worldwide hit. The graphics and animation are outstanding as is the gameplay. The world looks very big, so there is plenty of replay value. Again, my only real complaint is the wait to play, especially at the start. Angry Birds Transformers is worth a try.