App Review: Where The Flock for iPhone

If you’ve ever had an experience where a friend does not answer their phone, texts, IM’s, emails, nothing, then the app “Where The Flock” may be for you.

Where The Flock by byte IDEA Consulting

Where The Flock (WTF) is an application that shows you the locations of your friends and family (your “Flock”) on Google Maps so long as each person has Where To Flock installed. The app requires a Google account for access, so if you have a Gmail account you are already set.

Where The Flock reminds me a lot of Google Latitude, just without the need to open Safari. Instead, you’re opening an app. The primary difference here is that Latitude is essentially enabled immediately with every Google account, where with Where The Flock, you have to download an app.

The app makes use of Google Maps, which is where you will see your own location as well as the locations of any friends that you add. Each added friend is represented as a map pin and can be cycled through to quickly and easily view multiple friends on the same map interface.

After you add contacts, you can refresh the map to see where your contacts are. Their updated map pins will show their current location and the speed of their movement (in Km/h) if they are currently moving at the time of the update.

Some of the helpful features of the app include a bookmark menu where you may set bookmarks for Home, Work, and a parked car. You can also add a Shared Bookmark that is visible to all members of your Flock. This is a simple feature but can be very helpful.

To reduce the load on the app servers, users are limited to 101 updates per day. After your updates are used up, you can still use the app but you just cannot publish your location. This limitation can become rather annoying but it is really no different than the tweeting restrictions that Twitter imposes. 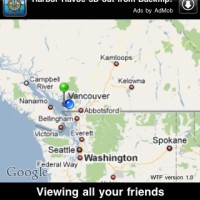 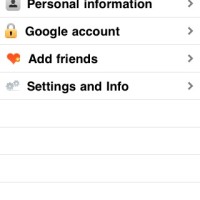 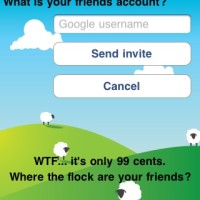 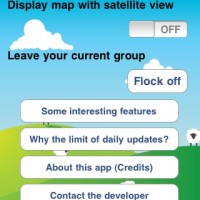 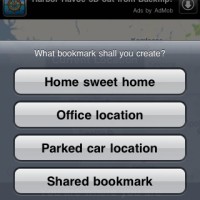 Viewing of the Google Map can be done in satellite or map modes but adding friends to your “Flock” to view on the map can be quite the burden. The process is very obscure and gives you no notification that an invite has been sent.

Once you receive an invite, a notification menu does pop-up, but I had to exit and re-load the app twice to get it to work properly. This cumbersome process of ambiguous friend requests and crashing almost prevented me from even showcasing this app. There’s definitely room for polish.

For general navigation, the app uses various buttons for the map menu, settings menu, and adding friends. It seems unorganized and would benefit from a single navigation bar along the bottom the map.

The current version of the app is free but it is also ad-supported. After this initial release period, the app is going to cost $0.99. There is an update coming that drops the ads in the app but I surmise that the update will also attach the price tag.

$0.99 is not a lot to ask for an app, but when a similar service such as Google Latitude is available for free, it rather kills the value of paying for an app that provides a free service with another vendor.

So as it stands, the app provides a decent amount of value but when the price tag shows up, that value will quickly diminish without some really good value-added features.

Where The Flock is currently available on the iTunes App Store for Free.