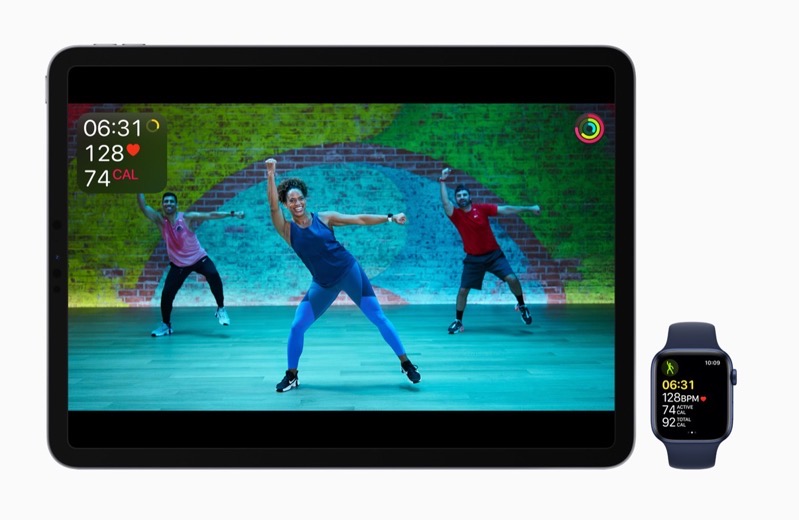 This will be quick dive (well, that was the plan) into how Fitness+ cycling workouts compare to Peloton and Zwift.

2020 was a year cut short for cyclists such as myself, due to COVID-19. While I was able to squeeze in a handful of local club group rides and with our usual crew (socially distanced…of course?), I missed out on some gran fondos I was looking forward to this year.

In 2019, I set personal bests at the Penticton Gran Fondo (4:34) and Whistler Gran Fondo (3:41), qualifying at the latter to represent Canada at the UCI Gran Fondo Worlds, set to take place this year (again at Whistler). But that was cut short due to COVID-19.

Normally, my cycling offseason is pretty tame, playing beer league ice hockey weekly (I’m pretty sure it causes weight gain) and watching Netflix and eating pizza. But this year I ditched the hockey season (#becausecovid) and since then I’ve been trying to work out more from home. It’s too miserable in the fall and winter here to ride outside (okay fine, I’m just afraid of the wet and cold #fairweathercyclists).

So recently I’ve jumped back into the virtual world of Zwift, where you can ride with friends by hooking up your bike to a trainer. This time around, I’m using a Schwinn IC4 (Best Buy, $999 CAD), instead of mounting my bike to a trainer or smart trainer, because it’s nice to have a permanent set up the whole family can use (plus not rock out on your carbon frame). Apple’s website notes cycling equipment used in Fitness+ are from Schwinn.

What’s great about the Schwinn IC4 ($999) is the spin bike is just a rebranded Bowflex C6, but available for $400 less (Bowflex owns Schwinn). The IC4 has built-in Bluetooth, cadence sensor and includes a Bluetooth heart rate monitor. This bike works with the apps from Peloton and Zwift for instant plug and play.

So with the Fitness+ launch—I was eager to test out how much of this bike I could use with Apple’s new fitness service, as many people are probably wondering the same.

Signing Up for Apple Fitness+

Getting set up for Fitness+ is a straightforward affair. After updating to iOS 14.3, iPadOS 14.3 and watchOS 7, you’ll be ready to go.

If you have an Apple Watch, you get one month of Fitness+ to try for free. For new Apple Watch Series 3 or higher purchases, a three-month trial of Fitness+ is included—that is if you can get it. Canadians need to chat with Apple iTunes billing support to get a promo code for this offer promised by Apple (re-pairing your Apple Watch also can fix this apparently).

Fitness+ is $12.99 CAD/month or $99 CAD/year and you can sign up by opening the Fitness app and tapping the Fitness+ tab to get started.

Using Fitness+ for a Cycling Workout

Since my slumdog iPad (6th gen) wouldn’t download the Fitness app due to Apple’s bug, I tested my first Fitness+ cycling workout on my iPhone 12 Pro Max. I have never followed a structured guided ride before so I was going into this with zero expectations.

I opted for a 30-minute Hip-Hop/R&B workout with Kim Perfetto, slapped on my AirPods Pro and I was off to the races. You don’t need to touch your Apple Watch at all. When you tap ‘Let’s Go’ on the workout screen on iPhone, everything just syncs and happens automatically. 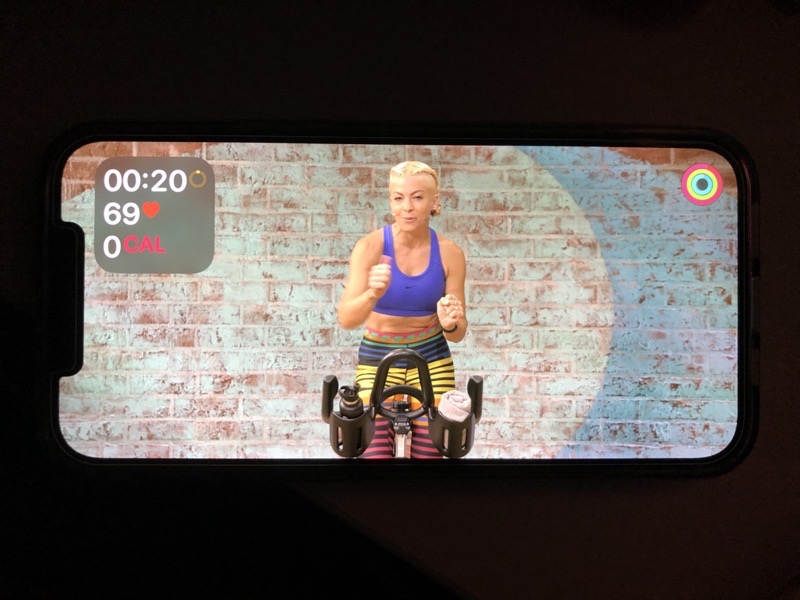 Right off the bat, seeing your Apple Watch metrics on-screen is one of the biggest highlight of Fitness+. You can see the status of your activity rings in the top right, while the opposite corner has the elapsed time of the workout (a ring beside the time shows a visual of how far you are into the workout), your heart rate from Apple Watch and how many calories you’ve burned.

You’ll also see the Burn Bar, which “shows your effort compared to others who’ve done the workout,” says Apple. If you enable the Burn Bar, your data is anonymously part of this competition metric.

Apple says the Burn Bar is calculated by taking into account your heart rate, calories burned and also is from data from “your last 2 minutes of work”. It will show up 2 minutes into your workout.

Along the way, Fitness+ on-screen metrics will indicate your low and high heart rate, the current song being played when it starts, halfway point, and when your exercise ring is closed, for example.

Your Apple Watch will show the same metrics as if you had started a cycling workout. You can pause your workout from Apple Watch or by taking out an AirPod.

When taking screenshots of your workout, the video isn’t captured, only your metrics. So the screenshots I took have black backgrounds like the one seen below:

Here’s the summary of your finished cycling workout with Fitness+. You get an option to share or opt for a Mindful Cooldown:

When you’re done your workout you can easily share it with friends and others via the iOS Sharesheet. Below is how the workout thumbnail looks in iMessage, showing your active calories burned and total time. It’s a great way to motivate friends and family to workout too. 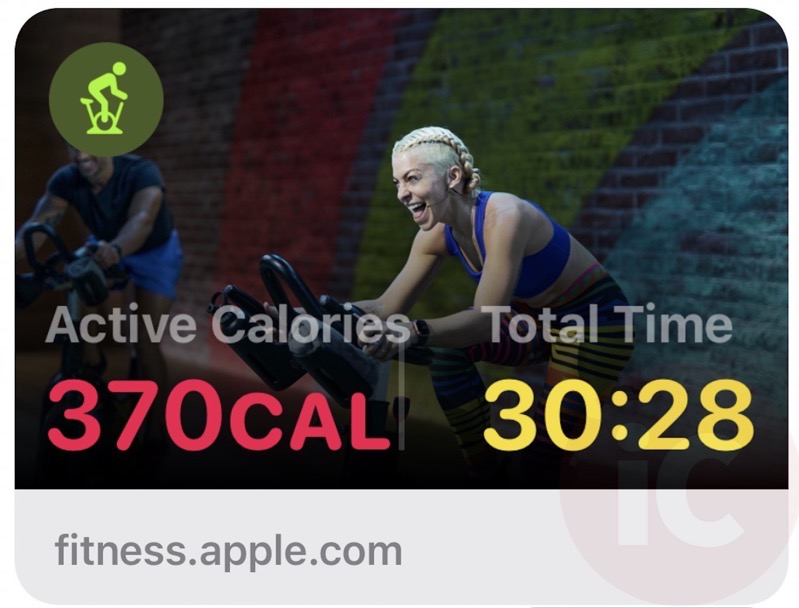 When friends tap the link, it jumps right to the workout you just completed within the Fitness app, and they can start it right away with a single tap:

What I was missing right away was my cadence, or your pedal revolutions per minute. This is a key indicator of setting your pace for rides and longer rides, so I had to rely on the Schwinn IC4’s data to see this metric. There is no way for the Schwinn IC4’s cadence sensor to connect to your Apple devices. Most likely Apple wants to make its cycling workouts to be ‘easy’ without the need for a cadence sensor, but this is available with Peloton and Zwift.

Apple has built a great set for their Fitness+ cycling workouts as there are other participants also cycling with your trainer, making it feel like a group workout. You don’t feel like you’re doing work inside a gym or studio, like Peloton.

You don’t need an Apple Music subscription to listen to the music included with Fitness+ and Kym’s playlist was pretty awesome for this workout. Her energy, enthusiasm and direction for the cycling workout meant I was sweating right off the bat. She knows her hip hop lyrics down pat, so this made the ride really fun. I was drenched by the time I was done (I suggest having a towel nearby or a powerful fan).

How does an Apple Fitness+ cycling workout compare versus Peloton?

After my Fitness+ cycling workout, I started one in Peloton to test but not kill myself for the sake of science (my body is still wearing its winter suit). I had run out of water (and was too lazy to get a refill) so opted for a shorter 15-minute hip hop ride with Hannah Corbin.

This was also my first Peloton ride, so I was able to quickly put together the differences between this and Fitness+.

For starters, my Schwinn IC4 cadence sensor paired easily with the Peloton app. As for my heart rate, I granted the app permission to use data from my Apple Watch.

The user interface with Peloton shows your time remaining in the upper left, heart rate and cadence. By tapping the screen, you can bring up other metrics, such as seeing who else is doing the workout with you on the far right. You can give these random strangers a high five to encourage each other. It would be nice to see some sort of multiplayer or group workout option in a future Fitness+ update.

Peloton also shows you the name of the track onscreen when it starts. As you can see from the Peloton set, it’s more gym-like and studio class and less casual compared to Fitness+, which I preferred.

As for Apple Watch metrics, while you’re riding on Peloton, the main display is your heart rate. Swipe to the left and you’ll see time remaining and a status bar: 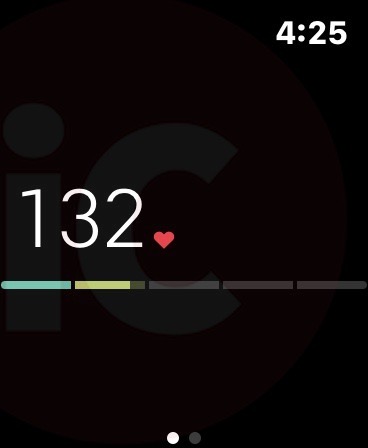 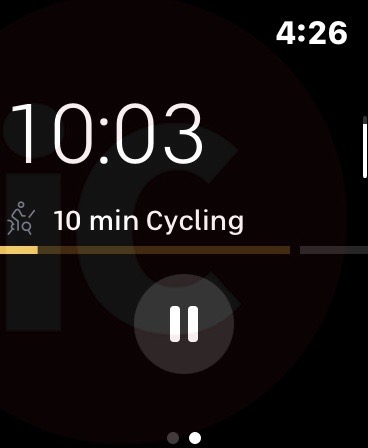 As for the workout itself, Hannah was equally as motivating and energetic as Kym from Fitness+. Both were great in getting you to push hard, stay out of the saddle when required, and also added some humour for a fun workout. I’d call this a tie.

But what I liked at the end of my Peloton cycling workout was Hannah’s cool down and built-in stretching. This wasn’t available at the end of Fitness+, as you had to go tap and start some other gentle cool down workout.

Here’s the summary screen of a Peloton cycling workout (yeah, I stuck to zone 3):

How do Fitness+ and Peloton cycling workouts compare to Zwift? For Zwift, it’s only fun if you have friends to push yourself and keep up with, or if you join a race. But the latter means you need to plan when to ride unlike on-demand classes from Peloton and Fitness+.

It’s hard to stay motivated within Zwift as it can get pretty boring if you’re riding solo. Heck, riding indoors sucks in general. I’m usually streaming a TV show or movie while I’m riding Zwift, and using the app so it can record my workout and upload later to Strava (my cycling diary). But with Zwift it’s more for the cyclists looking to get PRs and to share on Strava to compete with friends. You can also customize your character’s bike and avatar, as part of virtual upgrades.

Speaking of Strava, sharing a Peloton workout to the latter wasn’t possible from the iPhone app—I was only given the option to share using the iOS Sharesheet. It appears only those riding from an actual (and pricey) Peloton bike can sync their workouts to Strava for now.

So what’s my favourite cycling workout for now? I would pick Fitness+ because my first ride was pretty awesome, from a workout point of view. It was also fresh, fun and I got a good sweat in. I’ll definitely be testing other rides and trainers to get a better sense of cycling workouts. But if you’re a cycling nerd you’ll probably want to stick to Zwift for group rides and to stay connected to your cycling buddies during the winter.

Fitness+ is also cheaper at $12.99 CAD/month or $99 CAD/year, or bundled into the Premier Apple One tier at $33.95 CAD per month. Toss in discounted iTunes Cards from Costco and you’re saving 16% off this price (the same goes for Peloton and Zwift when you subscribe in-app). Peloton’s digital membership is $16.99 CAD per month alone, while Zwift is $19.99 CAD per month. I usually only subscribe to Zwift during the fall and winter, so that could stretch to 6 months depending on how Spring treats us.

At the end of day, paying money to get me motivated to exercise during the winter and not ‘lose myself’ to gorging on holiday treats is a bonus. ‘Health is wealth’ and I will say we’re pretty lucky to have so many on-demand cycling options available (there’s also Trainer Road, etc). If I’m able to consistently ride and keep my heart rate up, I should be in better shape heading into spring riding and not ‘get dropped’.

How are you liking Apple Fitness+ so far?

PS – AirPlay for Fitness+ is limited to Apple TV. Sorry, no AirPlay to your Mac.