Today marks the launch of Apple Watch Nike+ sales in Apple Stores and we received our 42mm model with Black/Volt sport band this afternoon from the good ol’ UPS man.

Here’s a gallery of our unboxing, with all photos taken by our iPhone 7 Plus (review still coming). We’ll give a quick first impressions of this watch as we go through these pictures.

The box for this 42mm Space Gray Aluminum model is all black, with the Apple Watch and Nike+ logos in white. It looks simple and does the job: 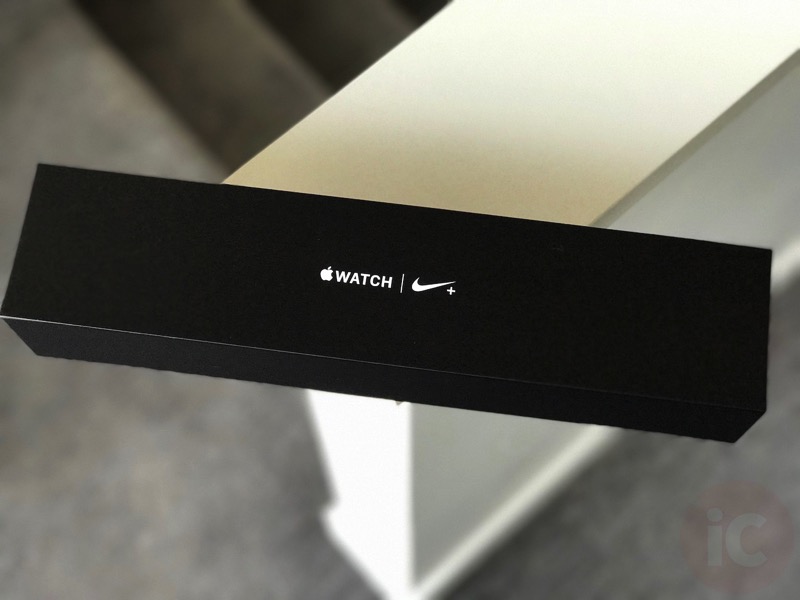 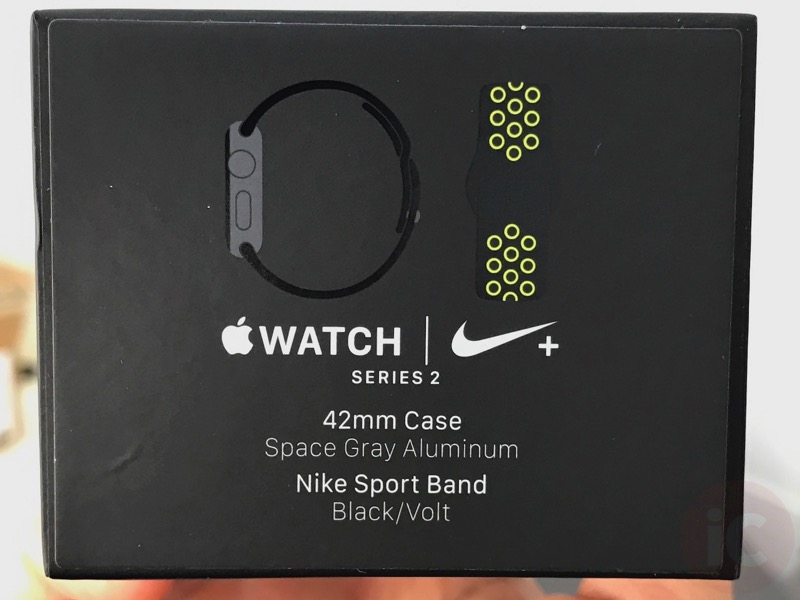 Once you open the box, you’ll see removable top insert which contains quick start instructions and the included small/medium band. The insert has the text “Designed by athletes by Apple and Nike”: 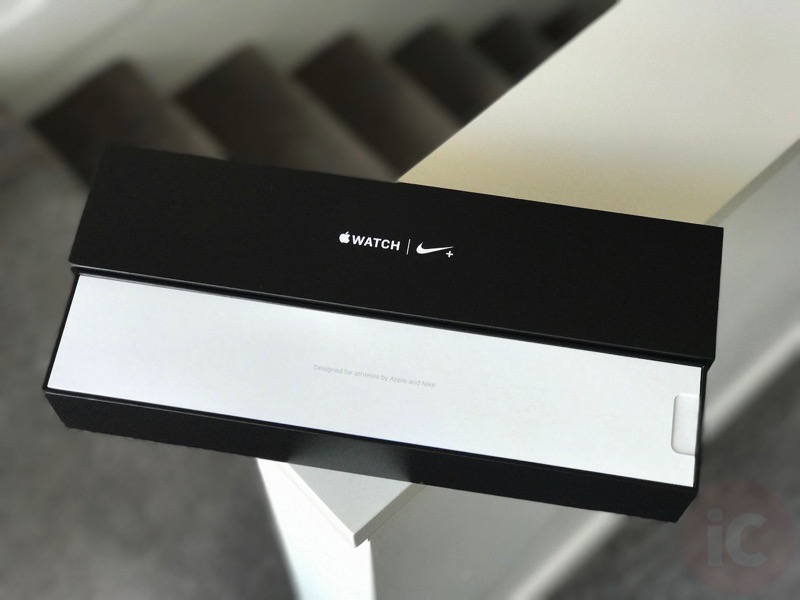 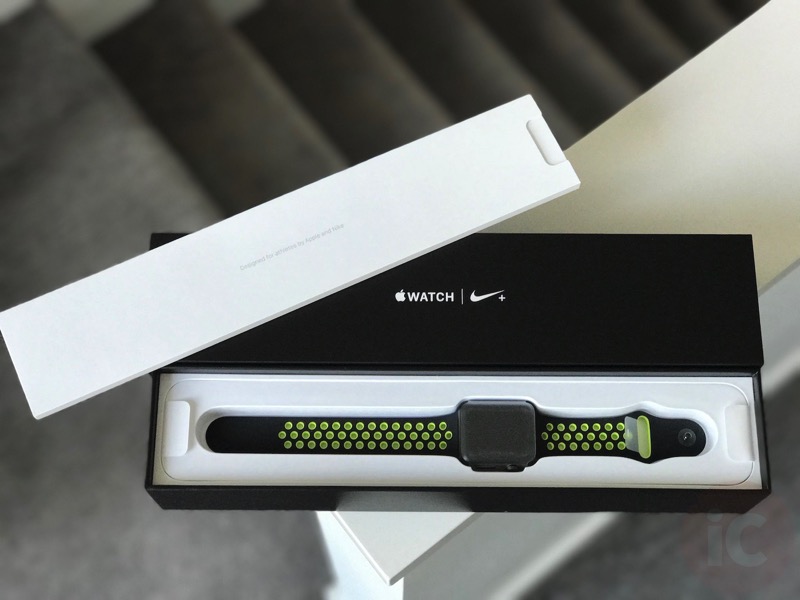 The bottom side of the watch is all ‘Volt’. The band is the same fluoroelastomer from the original Apple Watch band, but Apple says there are differences. This Nike Sport band is lighter thanks to its “compression-molded” perforations, which also helps improve ventilation: 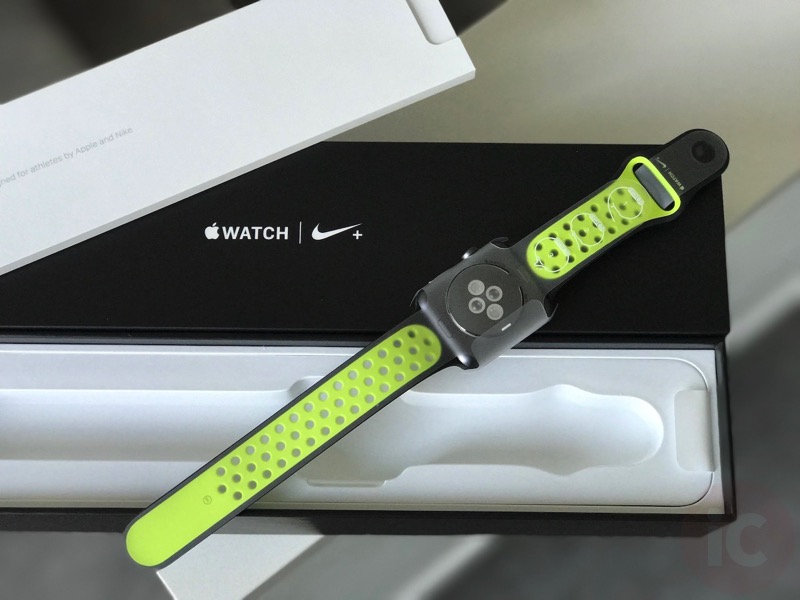 Upon setup, the setup screen is nicely matched to the volt colour of the band: 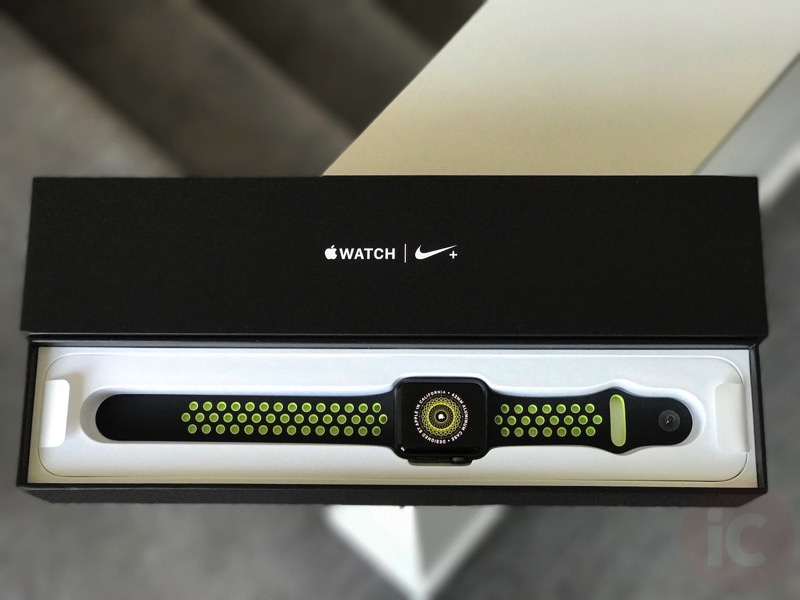 Here are a couple screenshots from the Apple Watch app setup: 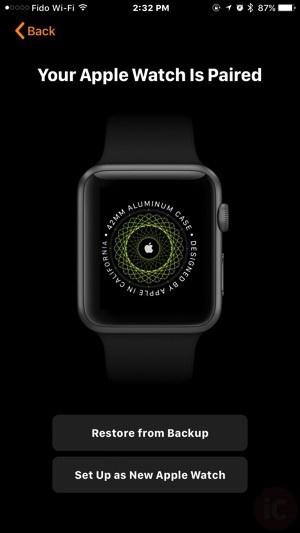 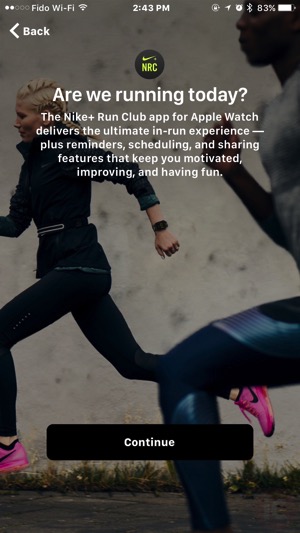 Other benefits of the Apple Watch Nike+? There are exclusive watch faces with Nike’s iconic volt colour, with both analog and digital versions, which you can customize. Each complication can be changed, like any other Apple Watch: 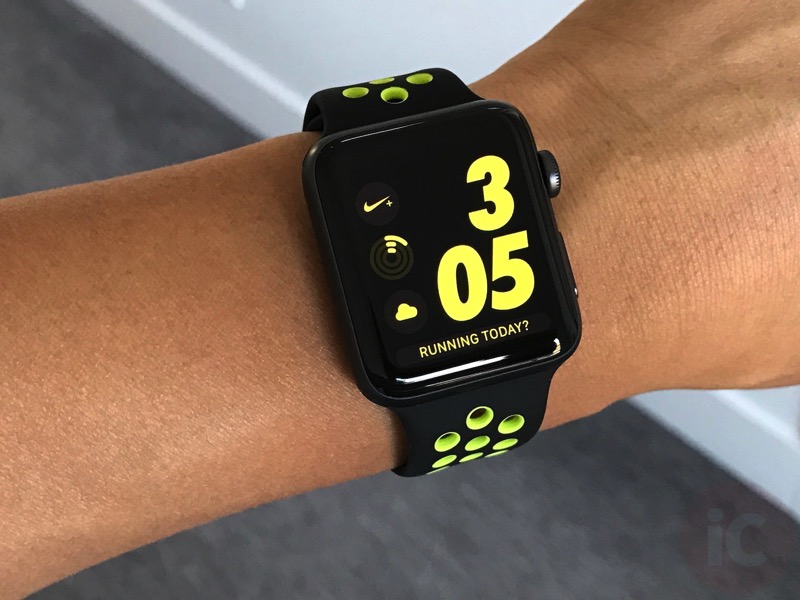 The default analog watch face doesn’t have any complications other than the Nike+ question “Running today?” In the customize screen, you can add complications to the top left and right of the face. 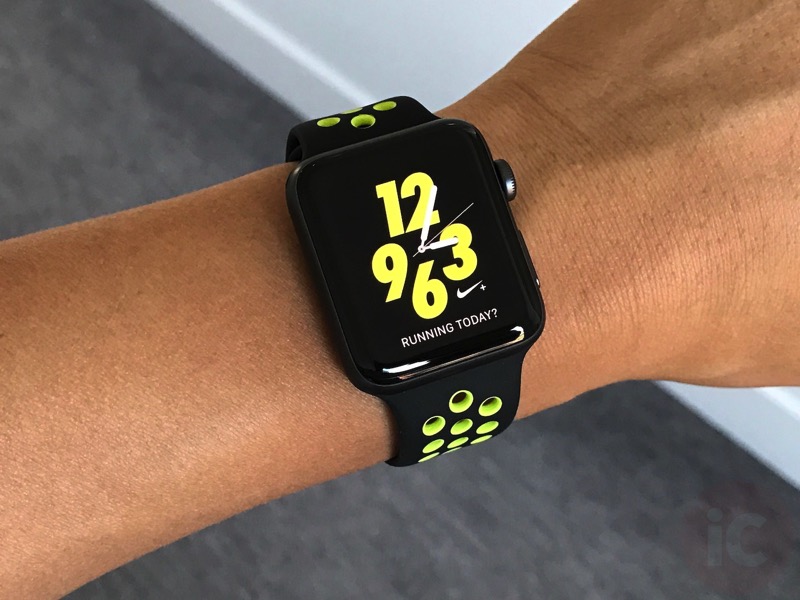 Here is a closer look at the Nike+ band. The hole spacing is exactly the same as the regular Sport band. 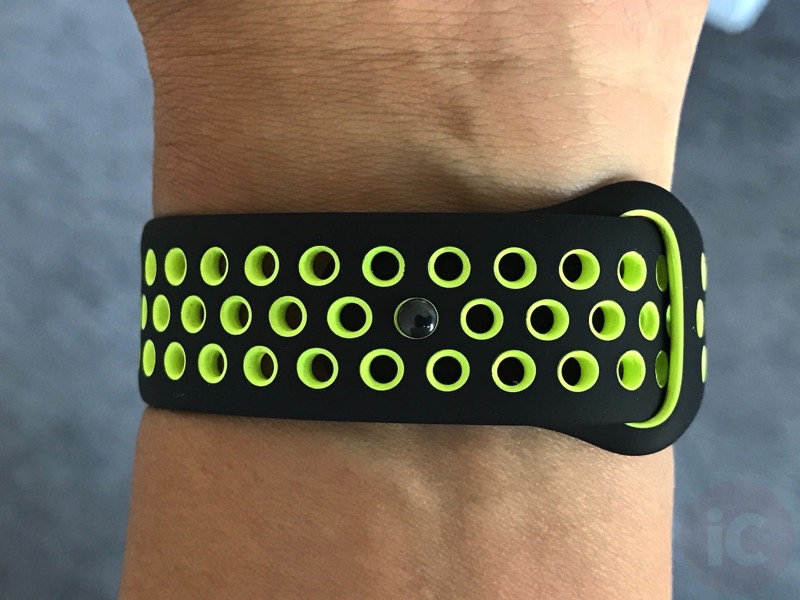 Here are a couple pics of the small/medium band included in the box: 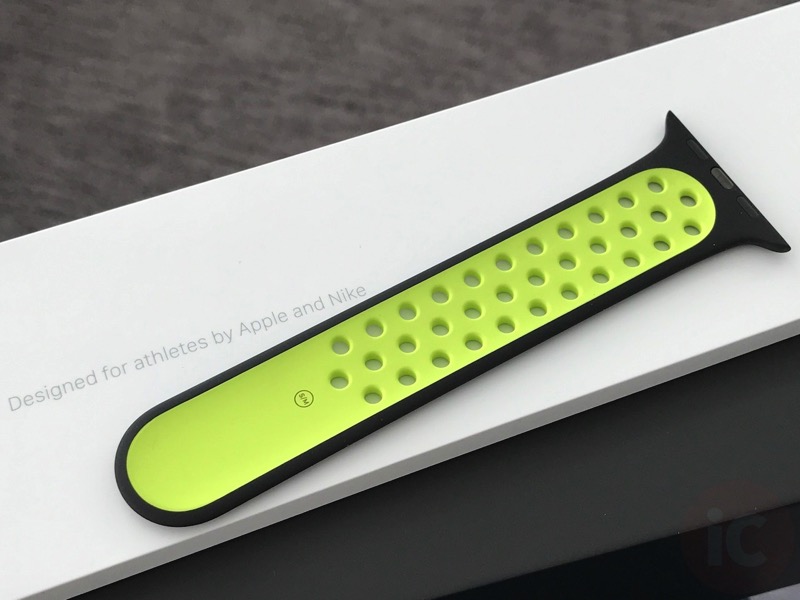 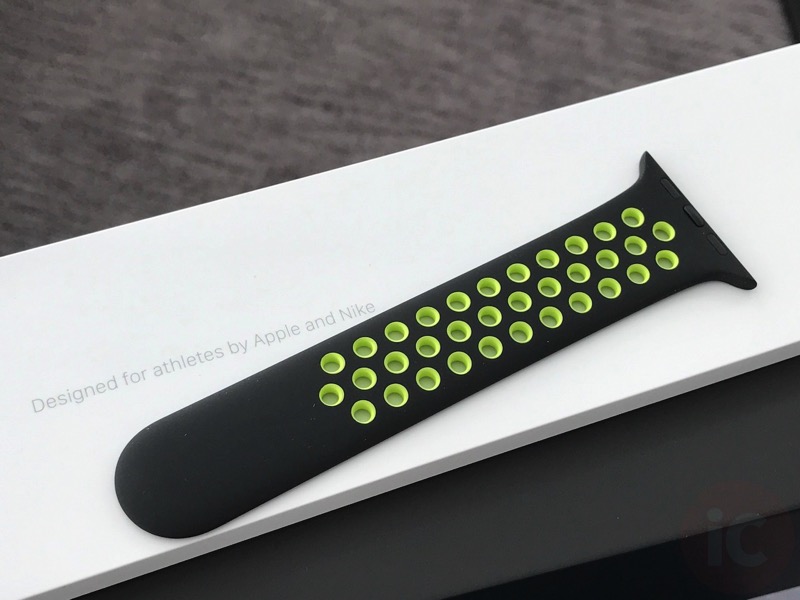 The Nike+ Run Club app is installed by default and you can set a reminder to tell you what time to run in 30 minute increments. With this Series 2 Apple Watch, I’ll soon be putting it to the test in the pool.

Personally, I use Strava to track my runs and bike rides, so I won’t be using the Nike+ Run Club app. It would be nice to be able to have the Nike+ app record my runs, but write them to Strava. The same goes for my runs recorded with the stock Workout app. This is something Apple and third party developers need to work together on to address.

Overall, the band looks pretty awesome and while you can’t tell immediately that it is lighter versus a normal Sport band, it does pack less material. Also, I noticed on a couple perforations, the Volt colour ‘bled’ a tiny bit onto the black part of the band. It’s only noticeable if you look closely, but I can see it. Not a deal breaker, but with Apple’s high expectations, you’d think it would be perfect.

Click here to read my original review of the Apple Watch Series 2 (I opted to send it back for this Nike+ version instead).

Did you pick up an Apple Watch Nike+? What do you think of it so far?