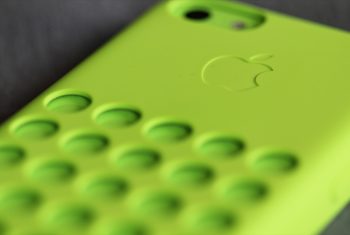 Apple’s new iPhone 5c is meant to be shown off. With its colourful backs, they are really eye catching. But what if you’re someone who likes to use a case? Having to cover up all that colour isn’t an appealing thought. So alongside the iPhone 5c announcement, Apple unveiled its new iPhone 5c cases.

They are available in six colours – white, pink, yellow, blue, green, and black. The key feature of these cases are the 35 holes cutout along the back. What this does is allow the iPhone 5c’s colour to show through while giving you a bunch of different colour combinations to suit your style.

But is the case worth it? Here’s my video review of Apple’s new iPhone 5c case.

Call it what you will – the ‘croc case’ or the ‘non case’ – Apple’s tried to give people who insist on using cases the ability to still show off their iPhone 5c. There is a lot to like about the case including adding some extra grip to the phone so you’re not worried about it slipping out of your hand.

But, there is a lot to dislike about the cases as well. The fact that the holes cut off the word iPhone, and only allow ‘non’ or ‘hon’ to show through, is displeasing to the the eye. It makes the case feel unpolished and not well thought through. There’s also the issue with dirt, lint and other stuff collecting in the holes over time.

While I really enjoy the build quality and idea of the case, I’m not thrilled with the finished product. Let me know what you think of Apple’s iPhone 5c case in the comments.