Apple’s pick for the 2011 iPad app of the Year, Snapseed, is currently free in the App Store. The universal app also works on the iPhone and iPod touch with a regular price of $4.99. The app is free as part of the iTunes 12 Days of Christmas celebration in the UK, but made available worldwide.

Here is the iTunes description that lists the powerful features of this app:

BENEFITS:
• Easily adjust your photos with a single tap using Auto Correct
• Tweak your photo to perfection with Tune Image
• Use Selective Adjust to enhance specific objects or areas in your photos
• Experiment with fun & innovative filters like Drama, Vintage, Grunge, and Tilt-Shift
• Add Image Borders for a finishing touch
• Share your creations via email, Facebook, Flickr, and Twitter

SUPPORTS:
• 6.25 MP images for iPad, iPhone 3GS, and iPod Touch (3rd & 4th Gen), 16 MP images for iPad 2 and iPhone 4, 4S (larger images will be automatically down sampled)
• JPEG and TIFF photos
• RAW photos (requires iPad or iPad2) transferred using the Camera Connector Kit (if files show up as a small thumbnail, go to Settings > Location Services and turn this setting to On for Snapseed. This is required to allow Snapseed to use the iOS RAW processing)
• Language support: English, German, French, Spanish, Italian, Japanese, Chinese (Traditional and Simplified) 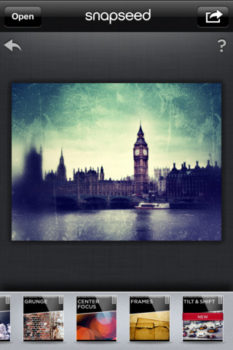 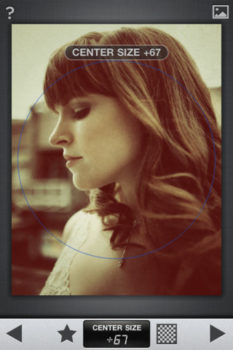