We all know about DropBox for free online storage. But there are other companies out there offering the same service for free, and one of them is Box.net. The company has announced they are offering a promotional free 50GB of storage to iOS users, for the next 50 days (it started yesterday and ends December 2nd):

This promotion starts at midnight tonight and runs for only 50 days, so get your free space in the cloud by following these steps:

1. Visit the app store and download the Box app for your iPhone, iPad or iPod touch
2. Log in to your account or register for a new one directly from the app
3. Start sharing and collaborating in the cloud
4. (optional but recommended) Tell the world how you’ll use your 50 GB with the hashtag #Box50GB 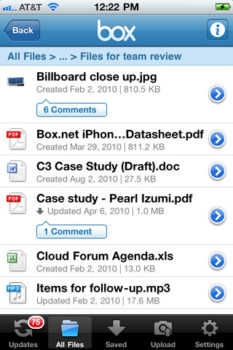 On top of 50GB of free storage, accounts will receive an increased file size limit of 100MB instead of 25MB. Box.net has over 7 million users, and the app was recently updated to support iOS 5. That means the app supports AirPlay (for iPad 2 and iPhone 4S) to stream content to your Apple TV.

This is a sweet promotion, and I’m looking forward to testing out Box.net. Jump on this now if you haven’t already!

Thanks Szoze for the tip!