Budget with Back in Black: Organize Your Purchasing Habits

There are dozens upon dozens of point-of-sale financing apps that help you organize your spending habits. Budget with Black in Black isn’t much different from the rest, with the exception of its surprisingly helpful catch phrase.

Featuring a much cleaner interface than other run of the mill financing applications, learning how to use the application is actually quite easy, which I don’t say often enough. A great feature of this application is how simple its purchase input is. Consisting of everything you need to enter in your purchase on one screen, the task becomes so painless that doing it at the actual point of purchase doesn’t bother you.

If you haven’t wondered already, the reason the application is called “Budget with Black in Black” is because the entire idea around it is that you are keeping your balanced budget ‘in the black’ rather than ‘in the red,’ which is represented by either the ‘remaining’ or ‘over’ amounts respectively. This is always visible to you because the main screen of the application displays a large green button for inputting purchases, slowly turns orange, then red depending on your remaining amount.

I find that this all pulls together to create a much different feeling than other financing applications because of the fact that you’re always trying to partition your income into different categories and making sure you don’t spend any more than you’ve allotted in any which one. Doing so helps visualize not only what you’ve spent, but what you have remaining in each category and in total.

For $2.99, I would highly recommend this app to anyone who wants to take charge of their purchases. It has the graphics, it has the features, it even has the ability to back up all your important data. All these make for a very useful and informative application. 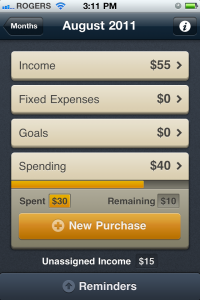