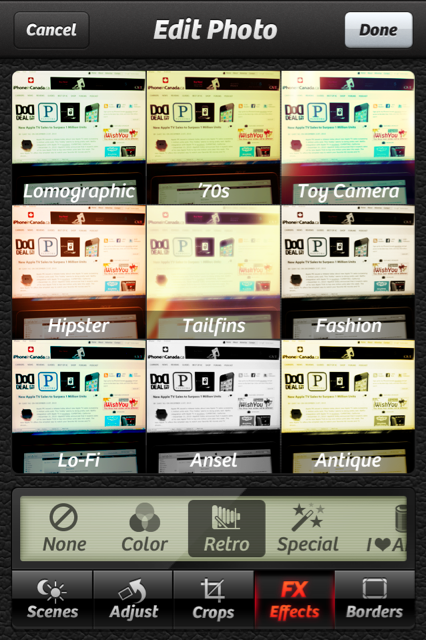 Late in the Summer, tap tap tap’s Camera+ photography app was the talk of the town. That was until they violated the App Store’s guidelines by turning one of the volume buttons on the iPhone 4 into the shutter. Apple dropped the hammer and pulled Camera+ immediately.

That was then and this is now, and Camera+ 2.0 is now in the App Store (went live earlier today). The best part? It’s much improved compared to before, and it’s on sale for $0.99 to celebrate the launch! There are new features such as improved borders, scene modes, effects, and more.

I was lucky enough to download Camera+ before it was pulled on sale. Now that it’s $0.99, this is a no-brainer if you want to make the most out of your photos.

And many, many, many minor enhancements and bug fixes.

I love using Camera+. It’s one of my favourite photography apps because there tonnes of options that are easy to implement. Are you a fan of Camera+?