Do you use voice activation apps on your iPhone? Google’s Mobile iPhone app was pretty cool when it was released, but don’t forget the Vlingo iPhone App too. Both of these apps did a decent job of identifying your voice, but only if you were able to speak clearly and not with a drunken slur.

Just the other day I noticed an up and coming app in the App Store. It was the Canpages Voice Powered iPhone app. Do we really need another voice app for the iPhone? Of course we do! The Canpages app is dedicated to Canadians as it will search any business in Canada based on a variety of commands. 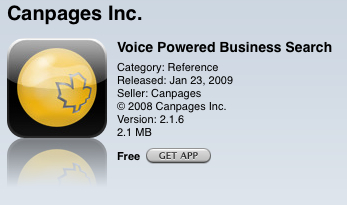 To use the app, all you have to do is tap the top bar, speak, and then tap it again once you’re finished. The app will then load up results. The cool thing about the Canpages app is that you can use a variety of commands, such as the following:

A city and province
“Tim Hortons in Vancouver, BC”

A neighborhood and province
“Italian Restaurant in Yorkville, Ontario”

A landmark
“Book stores near University of Toronto”

An intersection and city
“Sporting goods near Burrard and Robson, Vancouver”

If you leave out the location, the Canpages app will search for businesses near you by using your iPhone’s location. 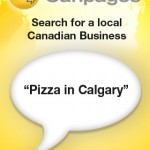 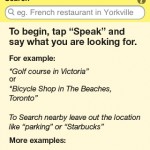 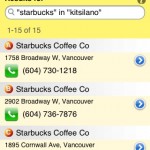 I tested out the Canpages Voice App and on my first test it got the correct result when I wanted to find “Starbucks in Kitsilano” and my result was successful. I tried a variety of voice searches and the app was correct about 85% of the time. This could be a a result of me not speaking clearly enough or the app itself. Either way, it did a decent job of deciphering my voice.

Once the results show up, you can see them all on the map, touch to call, or load up the specific result in Google Maps. The integration has everything you’d expect for the iPhone. 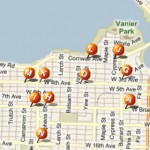 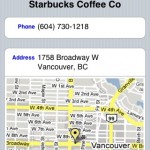 The Canpages Voice App is definitely worth trying out if you’re looking for Canadian businesses. It was able to distinguish most of my requests, even when I tried mixing it up. One of my grips is for better implementation of the bar that requires me to “touch” it to record my voice. I prefer the Google Mobile app, where it prompts your command once you put the iPhone up to your ear.

All in all, not a bad first try at this voice app by the folks at Canpages. Have you tried this app? What do you think of it so far? Click here to download it!