If you waste away hours of your life on YouTube then you should know about those bacon-filled Epic Meal Time videos that air every Tuesday, led by Montrealer Harley Morenstein and his crew. Epic Meal Time has now become one of the most popular YouTube channels in the world with 2.6 million subscribers and over 427 million video views.

Fling delicious unhealthy food at the Sauce Boss to make your score go sky-high but beware of the veggies, having too many will end your game and bring shame on you. 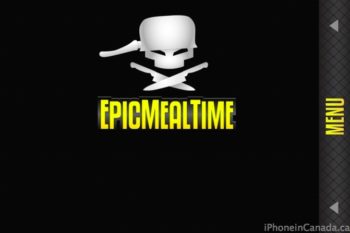 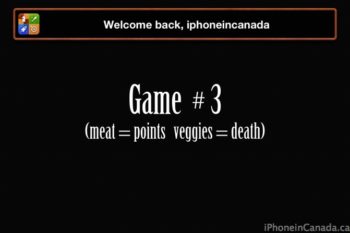 Now, if are familiar with Epic Meal Time videos you will love this game from the get go. The goal of the game is to feed Harley meat only by dragging bacon strips (and ‘gay bacon’ strips), Jack Daniels, whole turbacon, steaks and more towards Harleys mouth. Every morsel of meat increases their trademark ‘calorie counter’ in the top left corner.

Combos can be achieved when you simultaneously drag multiple pieces of meat towards Harley. When he eats, his face makes numerous references to the show, such as his classic and disturbing ‘eyes rolling to the back of his head’ look.

You must remember that meat is good for Harley but vegetables equal death, so the trick party is dragging onions, carrots and other veggies away from his mouth. Every vegetable consumed is considered a miss and the ‘bird call’ sound plays–the one used to bleep out swears on the show. 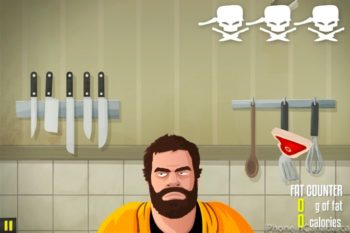 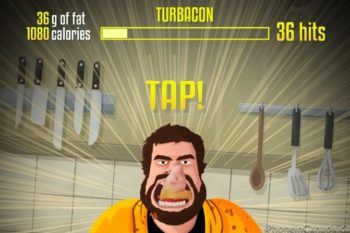 If you get three veggie strikes, the game ends and you get to see your total of points, fat and calories. You also accumulate ‘Internet money’ to purchase ‘next level upgrades’ for the game. A pretty cool touch is their tag line at the end of each game “Next time, we eat _____”. 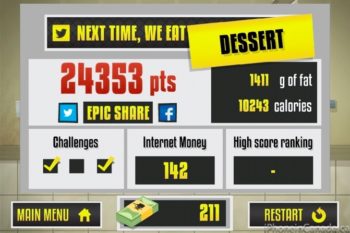 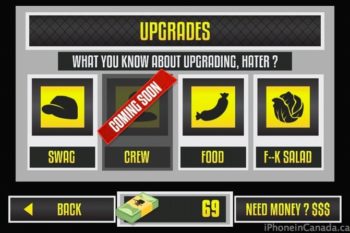 The Epic Meal Time game is awesome because of the soundtrack and sound effects. The background music is one of their better tracks from their earlier videos, and as you feed Harley his voiceovers pop up every where. This game is pretty fun and will please any Epic Meal Time fan.

iPhone in Canada interviewed Harley about the Epic Meal Time iOS app. He explained they always wanted to make an app and when they saw Molecube had a game similar to their vision, they thought it should be re-skinned as EpicMealTime, which took about two months from start to finish.

As for future appearances by other characters, Harley mentioned he has reached out to other people beyond EMT, like FPSRussia (and remember…have nice day) to be featured in the app. As for iOS devices used, Harley mentions they all have iPhone 4 or iPhone 4S models; he particularly enjoys playing EMT on his new iPad. Now that’s how the ‘Sauce Boss’ rolls.

Here’s the interview question I posed for the haters:

iPhone in Canada: Do you have any advice for the ‘haters’ out there that find $1.99 too ‘expensive’ for this game?

Harley: I think dollar menu cheeseburgers are great, but this game can bring you infinite more value then that. Stop being a frugal bitch and live a little. Making games cost money dawg.

For the price of less than a pack of bacon, EpicMealTime retails in the App Store for $1.99. Next time, we review your BlackBerry.

Contest! Enter to win a free copy of EpicMealTime for iOS!

Leave a comment below, telling us your favourite EMT episode. Make sure your email/twitter is attached to your comment so we can send you the promo code! Contest ends in 24 hours. Good luck!

Update: Congrats to our winner of the promo code, Dan!