Rafter is a physics based game mixed with a little problem solving wrapped in an iPhone/iPod Touch.

If you enjoy iPhone games with physics based problem solving and have a keen eye for angles, you may want to check out Rafter.

Rafter is a physics based game that supports both iPhone and iPod Touch. The game does not make use of the accelerometer but instead requires accuracy when creating the game play shapes.

To play, players must sketch shapes of required sizes in order to hit the red shape (the mine). Colliding with the mine is the goal of each level. Players have two options for shape creation; blocks and spheres (spheres are available in later levels). Each shape must be dropped with accuracy to strike the red mine.

The game includes 21 unique levels with varying degrees of difficulty and obstacles. As players progress, levels begin to include swinging platforms, fans, and other obstacles that make hitting the mine a challenge.

Each successful level scores points. The game has scores tied with the number of moves made per level. Each level has a fixed number of moves and the score increases when you solve the game using the least moves. You can begin to see the challenge here, especially with moving obstacles.

Lastly, Rafters supports Open Feint so that players can track and share their scores online.

Check out a video of the game here. 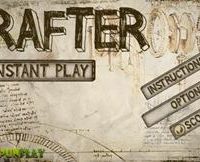 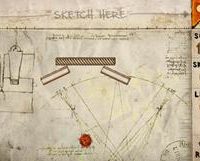 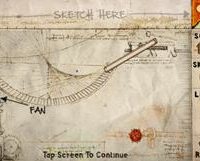 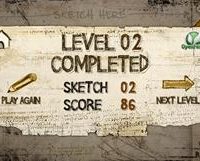 As mentioned previously, using a finger, players sketch either blocks or spheres to complete each level.

Each level has a designated area where players are able to draw the shapes. However it is vital that players correctly line up their sketch with the drop zone. In other words, lining up the sketch so that the shape will hit the mine.

The only quirk with the drawing area is that your finger can cover the shape during creation, making players unable to see how large or small the shape actually is.

Menu navigation is clean with four selections including a brief instruction page, of which is extremely useful and is definitely the first thing players should go to.

In-game visuals are very nice with rather old-time mechanical type graphics. In later levels, most of the game obstacles are moving graphics and these were well done.

The sound effects are good and the in-game music is rather amusing, however it can become repetitive. To this end I was hoping to be able to use my own iPod music, but was not able to.

Rafter is available in the App Store for $0.99.