As the game title indicates, if you enjoy skipping stones in real life, then you will love Skipping Stones on your iPhone/iPod Touch!

Skipping Stones takes players to exotic locations where they can relax and skip stones across clear blue water. However the game also includes a few fun challenges.

Skipping Stones includes three game modes for play; Basic, Relaxed, and Challenge. The Basic Mode is a simple toss and watch that is more akin to a free play idea. The second game mode is called Relaxed. Relaxed builds upon the Basic mode except that you can steer your rock skips using your iPhone/iPod Touch.

If you’re looking for a challenge however, Challenge is the third game mode. In Challenge, once a stone is thrown, players must keep the stone afloat by tapping on moving red targets along the bottom of the play area. Think Tap Tap Revenge/Guitar Hero but only one target and moving horizontally.

With each successful tap, players gain points however the speed at which the target is moving increases dramatically. Out of the three game modes, Challenge is definitely the most fun. There is also a tutorial mode for those who want to practice or learn before they play.

Skipping Stones includes two levels in which players may play, both of which are exotic beach landscapes. The only difference is one is during the day and the other at sunset. Before each level begins, players are greeted by a brief in-game cinematic that showcases the level.

Skipping Stones also includes OpenFeint integration along with achievements, so players may post their high scores and compete online. The entire game play experience reminds me a lot of Nintendo Wii-type games and is actually a lot of fun. 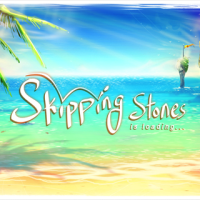 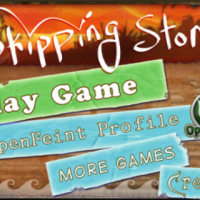 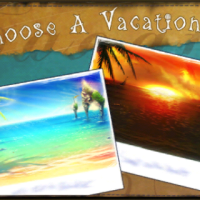 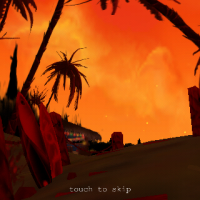 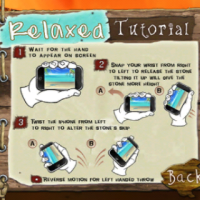 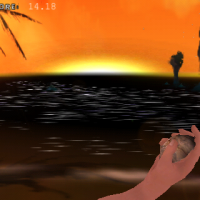 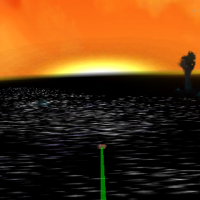 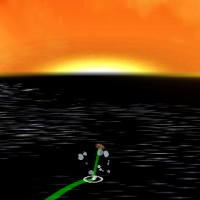 The app makes use of the accelerometer to accurately toss the stones and the motion is a flick and twist, just like when throwing a real stone.

While the controls are easy to understand, I found them rather difficult to get use to. It was difficult to get a consistent stone skip even when doing the same wrist flicking motion. However before each play, the game does take players through a brief visual tutorial.

Navigation of the app is nice and clean and I like that there is an OpenFeint menu item right on the opening menu, as it makes for easy access to high scores and achievements.

The game includes rather beach-like calming music before game play and of course, players are greeted with water sound effects of the skipping stones.

The visuals, while not amazing, are rather good and as mentioned earlier, seem to have a Nintendo Wii-type aura around them. Water renders nicely and the hand that tosses the stone actually looks like a hand holding a stone.

Skipping Stones is available in the iTunes App Store for $0.99.