Last year, Shaw Communications purchased the TV assets of CanWest Global in a $2 billion dollar deal. The Global Video iPhone app was released this past April (the iPad app debuted in December 2010) and recently an update brought the much anticipated support for AirPlay. This feature allows iPhone and iPad users to stream videos right to their Apple TV wirelessly, so they can be watched on the big screen. 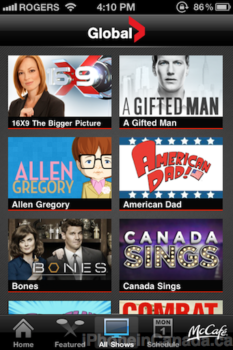 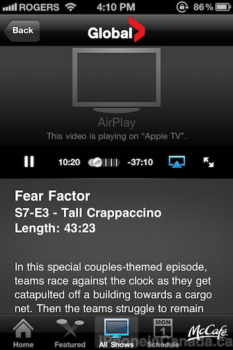 I tried out the latest update and the quality was excellent as it streamed to my Apple TV. The library of shows have improved and are fairly up to date (all the new episodes of Fear Factor are available). Episodes are preceded with advertisements. I did run into some issues though. AirPlay would cut out roughly 10 minutes into the video or so and the video would have to be restarted. Others have run into this issue as well based on reviews in the App Store, but some haven’t had issues at all. 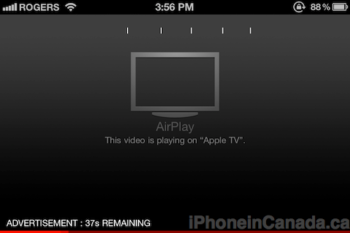 The Global Video app itself has exceeded over 720,000 total downloads, and full episode plays have shot up over 53% since the Spring launch, according to Shaw. Moreover, they claim the Global Video app is the first and only private broadcaster in Canada to support AirPlay with its mobile application.