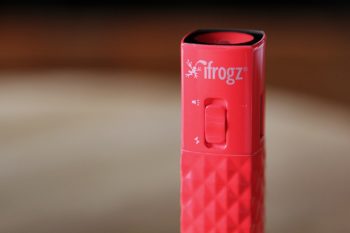 There’s nothing worse that running out of battery when you’re no where near a computer or power outlet. Thankfully there are options to help you with your power needs such as cases and power bricks. But those can be bulky and expensive, and they only really do one thing. Enter the GoLite from iFrogz. Here’s my review of this compact and affordable battery backup that is also a flashlight.

The GoLite packs a solid 2600 mAh battery inside its compact shell. That’s enough power to fully charge your iPhone. In my testing there’s even been enough battery power leftover to use the flashlight for a bit. If you just wanted to use the GoLite as a flashlight, iFrogz says you’ll get about 48 hours of use. I believe it. My son loves using a flashlight at night to read and after more than a week of use I still didn’t need to recharge it. Charging the GoLite is simple via an included micro-USB cord.

The GoLite comes in a variety of colours to suite your style. It’s also nice and compact. It’s easy to throw it in a bag or pocket and just forget about it. Yes, you do have to also carry your iPhone’s charging cable, but that too takes up very little room.

It’s funny, when I first got the GoLite I wasn’t overly excited. I didn’t see the need for a charger that’s also a flashlight. But over the past couple of weeks of using it, I’ve changed my tune. I’m amazed how many times at my job having a flashlight is very beneficial. I’ve always just used my iPhone, but in some cases it’s just not practical and plus using the flash as a light is a nice drain on the battery. Add to the fact I run my iPhone down to zero daily, having the GoLite has been a huge benefit.

As I mentioned in the video, there are a couple of things I think could help make the GoLite even better. As it is right now it’s a little slippery. I’ve dropped it a couple of times. Thankfully it’s also very rugged. A more rubber grip might be beneficial, although it would take away from the look of the GoLite.

Overall I’m very happy with the GoLite and it goes everywhere with me now. If you’re looking for an affordable and compact backup battery charger, make sure to take a look at the GoLite from iFrogz.