IntoNow is one of the coolest apps I’ve run into so far. It’s been making noise for a while now as the “Shazam for television”. If you’re familiar with how Shazam works, then you know what I’m talking about.

IntoNow will identify live TV (from the last five years) and provide you with immediate information about your show. On top of being able to identify shows, it will also act as a multimedia social network that allows you to broadcast what you’re watching with friends. It’s very similar to GetGlue.

Features:
– Identify live TV, or anything thatâ€™s run on TV in the last five years, from your television, computer or mobile device.
– Get full episode and cast information, as well as info on future airings.
– Receive notifications when your friends are watching the same episode or show.
– Comment on what your friends are watching in the app, or on Facebook and Twitter.
– One-click access to IMDb, Netflix, and iTunes so you can learn more or start watching right away.
– Add new friends using Facebook, Twitter, your address book, or â€œsearch by name.â€

Here are some screenshots of IntoNow identifying Conan O’Brien: 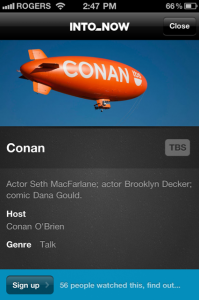 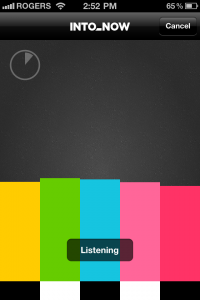 The issue with IntoNow is that it’s only available in the US App Store. For those with US accounts, just download right away. How to download IntoNow in Canada? Easy. Follow our guide here on how to create a US iTunes account without credit card. 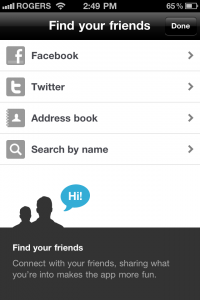 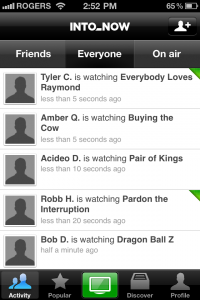