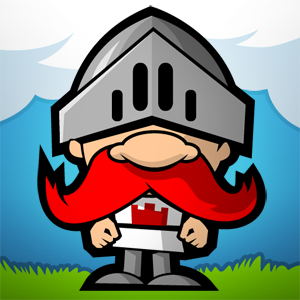 There is no denying the success of Angry Birds. It’s hard to go anywhere these days without seeing those birds and pigs. They’re on shirts, they’re toys, they’re fruit snacks, pretty much they’ve taken over the world.

So it shouldn’t come as a surprise there are those trying to capitalize on that success. Siege Hero from Armor Games Inc. borrows a lot of the look and feel of Angry Birds. There are of course a few new tricks to this 2D game with cartoony graphics.

Gone are the pigs and birds, instead replaced with rocks and ancient warriors. Siege Hero gives you a first person perspective as you have to hurl rocks at the structure head on, instead of launching birds from the side.

But the object of the game is still the same. Knock over the structure, killing the enemies in as few shots as possible. As you progress the levels get more difficult, and you even have to try to complete some by killing the enemies, and not killing the innocent bystanders on the screen. It can make for some challenging game play.

So what do you think? Fun addictive game, or just a cheap Angry Birds knock off?