For those who are using a 13″ unibody MacBook (or any other 13″ notebook for that rather), the following laptop sleeve review will be of interest to you. There are so many options out there for sleeves and bags, such as the be.ez LArobe Allure and LEvertigo. Today we’re going to take a quick look at the iSkin SOHO laptop sleeve in graphite (black/grey).

The iSkin SOHO is a basic laptop sleeve, with a simulated leather exterior. It’s a thick, multilayered design that is made of think padding that will protect your MacBook from bumps and dings. The zippered opening is also protected so your MacBook won’t get scratched and there’s a reinforced spine.

As you can see from the pics below, the SOHO is a minimalist design. No extra sleeves or pockets are available. It can also however, double as a resting pad for your thighs when you’re using your MacBook. 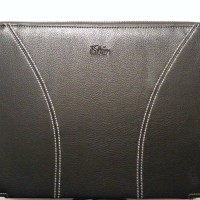 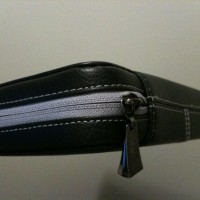 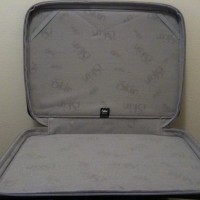 What I like about the iSkin SOHO is that it’s a thing design that makes it easy for your laptop to go inside your bag, but will also protect it from minor bumps. Obviously no case or sleeve will protect your MacBook from a high drop. That’s when prudence and care comes into play!

The iSkin SOHO retails for $49.99. That price is meant for the premium market. I would suggest finding one to try out and considering other alternatives before you commit to buying.