Today I have for you a great cannon game called “Toy Raid” and it has one of the coolest weapons ever…a Nuke!

Toy Raid is a cannon game where you are the single base defending yourself from wave after wave of baddies, which include helicopters, jets, planes, and more. The cannon on your base continuously fires, so there is no need to be pushing a “fire” button constantly. As the cannon fires, you simply move the direction of fire into what you want to destroy.

The control scheme however is a little difficult to get used to I found. You have two options for controls; Tilt or Touch. After trying both, I found them both to be equally difficult to master, but between the two I found the Touch controls to be far more responsive. The one limitation however of the touch control is it is extremely difficult to get the cannon to aim at the 90 degree angle which is crucial when the parachute jumpers land on the ground! That however, is my only issue with the game. 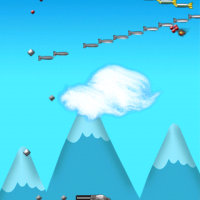 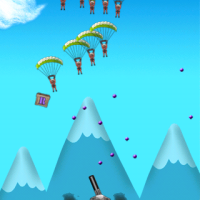 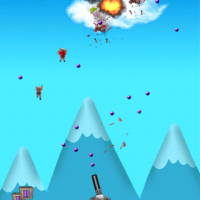 The game play is fantastic! You get some great visuals and great sound. Speaking of the sound, when you shoot a parachute jumper, the sound is nasty! It’s all ‘splattery’ and gory! It’s awesome! You also get 50 levels to grind through and a series of power-ups to help you along the way including such goodies as a Flak Cannon, Rapid fire, or my personal favourite, the Nuke!

To activate the cannon upgrades, you just shoot the supply boxes that fall along with the enemies. To activate the widow maker (my personal name for the Nuke), you just tap on it in the bottom corner of the screen. Nukes however do not last forever, as you only receive a limited supply, but their payload destroys everything on the screen in one swift hit. In terms of lives, you only get three, but you can collect more as you proceed through the waves, but once your out of lives, it is Game Over for you.

By the way, I suck so bad I only made it to wave 7 and got completely overwhelmed by the baddies! *tear*  *sad face*