You know that amazing feeling you get when you’re using a well made and polished iPhone app? I had that hunch the moment I downloaded the ScoreMobile iPhone app (way back in Oct 2008). The ScoreMobile app is courtesy of The Score television network, one of my favourite sports networks on TV (Love Court Surfing and segments by Cabbie!).

The ScoreMobile app is proving to become one of the more popular apps in the App Store–and on the Blackberry. It’s been downloaded more than 1.45 million times from RIM’s App World! But more importantly, the impressive stat is that 60% of ScoreMobile users are from the United States! I guess the other American sports apps just don’t cut it, eh? 😉 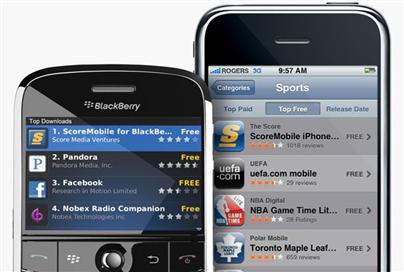 Part of this success was the result of the Score’s future planning. Prior to the iPhone coming to Canada, they had invested in hiring a Director of Mobile to focus on targeting American mobile users. Once the iPhone came to Canada and the App Store was revealed, you can say the rest was history.

If you haven’t downloaded the ScoreMobile app, you’re missing out on one of the best sports apps on the iPhone. It was recently updated with VIDEO, so you can catch all the cool segments and sports highlights right on your iPhone (NBA highlights, but no NHL as of yet).