TED has officially announced the launch of their app for the iPhone and iPod touch. Originally, the app was only available for the iPad (launched last October). TED for iPhone was available in the App Store two weeks ago, but now it’s ready for primetime:

The entire library is available for browsing and searching in both online and offline modes. Bookmark or download your favorite TEDTalk for playback anywhere, including AirPlay. Tune in to TEDRadio for instant, one-click access to a continuous stream of TEDTalks audio. Share favorite talks and playlists with your friends, and much more. 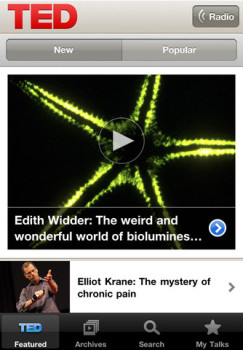 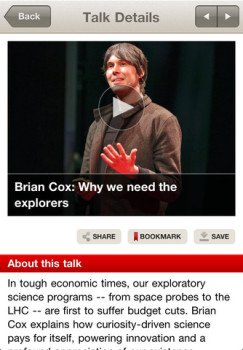 If you’re a fan of ‘ideas worth spreading’, this is a must-have app. Earlier this year I had the opportunity to attend TEDxVancouver, and it was a fantastic experience. Since its early days, TED has accommodated iPhone users. Back in March of last year, it launched a non-Flash version of its website for iOS users.

I love the inclusion of AirPlay within this app to allow streams right to your Apple TV. Well done, TED team.