textPlus Has Given Out Over 381,000 Numbers in Canada, Update Brings Voice Notes and Facebook

Back in August, the free messaging app textPlus had an update that provided a free telephone number to Canadians, enabling friends and family to text them. In two months, over 381,000 numbers have been given out to Canadians. The textPlus user base has exceeded 60 million worldwide and over 16 billion texts sent–impressive numbers indeed.

The latest textPlus update brings the ability to send 30 second voice notes, Facebook integration, along with a redesigned interface. If you’re in Canada, the free number from textPlus will turn your iPad or iPod touch into a text messaging device, capable of sending and receiving.

Facebook Integration:
– Contacts List Auto Sync – Syncs your Facebook friends on textPlus right in your Contacts list in the People tab
– Get Notified when Facebook Friends join textPlus – once they do, you can start texting them immediately
– New Friend Notifications – controls now in settings

Send Voice Notes APP-TO-APP or to any 10-digit US or Canadian mobile number for FREE – even if they don’t have textPlus!

Redesigned People Tab makes it easy to find friends on textPlus & message them immediately or invite friends to join textPlus! 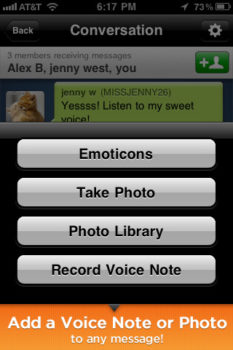 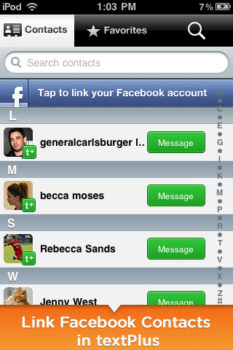 Apps such as textPlus might seem irrelevant once iOS 5 and iMessage comes along, but that’s not the case. TextPlus allows users to text message any mobile number for free, regardless of what device it is. iMessage cannot do this.