I have a question for you: what should you be doing right now? What could you be doing instead of reading my blog (the obvious answer of course is reading the blog!) or checking up on your RSS feeds? Don’t you have work to do, or some errands to run?

If you answered “yes” to any of the questions above, then you are a procrastinator like the rest of us. Welcome to life, where our list of “things to do” seems to grow bigger or left in hiding for day, then weeks, and months! How to combat our inherent laziness? Easy, try out some Get Things Done (GTD) aps for the iPhone!

Helping you Get Things Done: Things and OmniFocus

For the past couple of months I’ve had the pleasure to test out two major apps in the GTD arena, for both the Mac and iPhone. The two programs I’m talking about are Things and OmniFocus. I’m going to take a different approach in my experience with these two GTD apps.

Instead of going through the traditional review of documenting each feature, I’m going to describe my experience with them, a relative GTD newbie and recent Mac user. Just how do these two apps compare for the average person?

The first GTD app for my Mac/iPhone I tested out was OmniFocus. This program is professional-grade personal task management, and is extremely powerful.

OmniFocus lets you capture tasks from any app in OSX. Also, there is deep integration with syncing with iCal and Spotlight. You can even send yourself tasks via email. 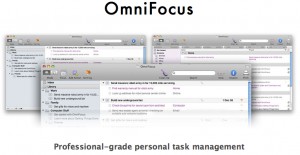 When I first started up OmniFocus, I’ll be honest–it took me a while to get the whole “mantra”. After watching their basic introduction video, I slowly got the hang of what the whole concept was all about.

There are three concepts you need to drill into your brain:

Action – something you can physically do (in one step)
Project – goal achieved by more than one “action”
Context – physical requirement for an action (a place, an object, an activity, a state, or a person)

Now that you have this down, the main three steps in using OmniFocus involves the following “COD” mantra:

After I watched the intro video I felt I was ready to put OmniFocus to work. It was easy enough to start dumping my ideas into the Inbox, then start organizing my “actions” into “projects” and assigning different “contexts” to them.

The learning curve with OmniFocus is a bit steep right out of the box if you’re not familiar with GTD and the “mantra” of COD. However, with practice, as with anything I started to get familiar with the app–but of course there is much more to come.

OmniFocus also lets you drag emails from Mail right into your tasks. This makes it incredible easy to reply to important emails and will save you time from searching in the future.

OmniFocus iPhone App — How does it Compare?

I also had a chance to try out the the OmniFocus iPhone app. I was very impressed with the interface–it was identical to the desktop app. You can setup OmniFocus to sync using WEBDAV service through MobileMe. 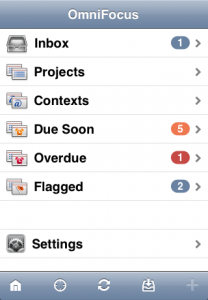 However, that costs money. I was able to use the free services of SwissDisk to sync my OmniFocus database and keep every single change made on my iPhone/Desktop in unison. I will write a post on how to do this later.

You can also use your iPhone’s camera to take pictures and record audio too! This is a very useful feature if you don’t have time to jot down notes and want to save info for later. 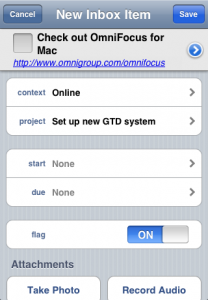 Things: Simplicity in Its Design and Workflow

Straight out of the box, you will notice that Things is extremely simple and easy to use. There’s no guessing or tutorials needed like OmniFocus above. You enter tasks into a list and assign tags to what they are related to.

The layout of the app is Leopard-like, so it’s very easy to pick up where and how to place new tasks. The following categories are used to organize all your tasks in Things:

Things for the iPhone – Looks and Performs Like the Desktop Version

Things also can sync with iCal (OSX 10.5 required) and your iPhone. In order to sync the iPhone you will need to connect to a wireless network connection. I have yet to figure out how to sync Things over WEBDAV. 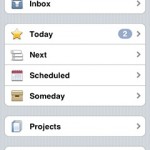 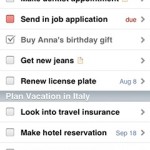 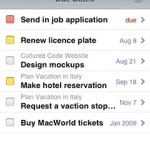 Things is extremely simple and straightforward to use. Its clean UI is beautiful and makes the app a joy to use. Definitely a bonus for people who don’t have the time to learn and explore the ins and outs of a program (yes, I’m talking to you, lazy!).

What Should You Buy? Things or OmniFocus?

I can’t tell you what one you should buy. I can however relay my experiences as a GTD-newbie using two of the best GTD programs available.

OmniFocus feels like it would be more useful in a corporate or business-like environment because it is extremely feature-rich and powerful. There are features and settings that I have yet to even explore. With this in mind, OmniFocus will require that the user take some time to learn and experiment to fully utilize the app.

What I did like was the ability to have have tasks within tasks in a heirarchy format, which was very useful for keeping tabs on the next step in big projects. The ability to have your OmniFocus sync over WEBDAV is a plus too.

Things on the other hand, was extremely easy to grasp and use right out of the box. The program’s UI is very Mac-centric so the transition is incredibly seamless if you’re looking to get started right away.

However, Things does not compare to OmniFocus in terms of being able to use your iPhone camera to snap a pic, or to record a voice note. I don’t see this as a shortfall though, because sometimes it is best to K.I.S.S. (keep it simple stupid).

In all honesty though, I’m going to share a little secret with you. The ultimate GTD application is not available in stores. What I’m trying to say is that YOU are the one that can get things done!

These GTD apps are useless if you don’t use them and if you aren’t inclined to stay on top of dumping every task into the program, then you’re going to be back at square one. But, if you want to clear your mind and stay more organized, utilizing a GTD app like OmniFocus or Things can change the way your live your life.

The final verdict is also the price. You need to strongly consider each program and the investment you will make to get a desktop client on your Mac, and similarly on your iPhone. Being able to use the iPhone version of each app compliments the desktop version and is absolutely essential.

For those who won free copies of Things and OmniFocus during our $2000 Anniversary Giveaway, what are your thoughts on these top GTD apps?