On October 1st, Matt Rix (@MattRix) sent a message on twitter to @iPhoneinCanada asking to have a look at his Canadian made Trainyard Express.

I was expecting someone else to review it before I did, but it just looks like I got to do it afterall! 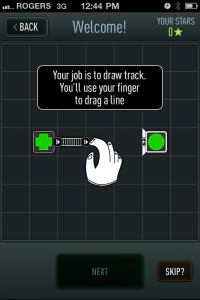 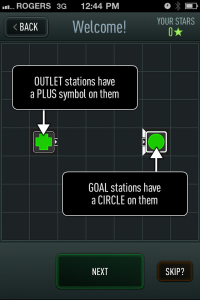 This is a puzzle game like none I had seen before, and I love puzzle games. The idea is fairly original, the goal is to take the trains from the Outlet stations to the Goal stations.

The puzzles require you to find solutions based on the paths, colors, color combinations and timing of the trains. I have to say that some of the levels make you think before you can come up with a solution.

Recently, Matt posted on his blog a post called “The Story So Far” http://struct.ca/2010/the-story-so-far/ where he describes the history of the development of the game, a very interesting read.

Gameplay is simple and the tutorials help you through learning it. The graphics are simple and straight forward.

One of the things I really like about this app is that it also allows you to have a second player profile which very few games actually support. That means that you could play and be at and advanced level and also let someone else play and “earn their levels”! 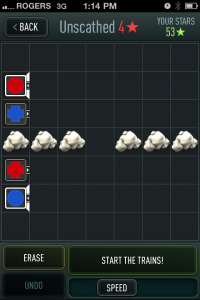 Another interesting feature is the “color blind” mode which lets people that suffer from color blindness play the game with no consequence. A simple small letter in the middle of the stations and the train tells you the color of each.

Trainyard Express has enough puzzles (60) to keep you busy and challenged and… hooked!

The full version of Trainyard has 150 puzzles (and no overlap in puzzles with Trainyard Express) and is definitely worth the $0.99 spent on it.