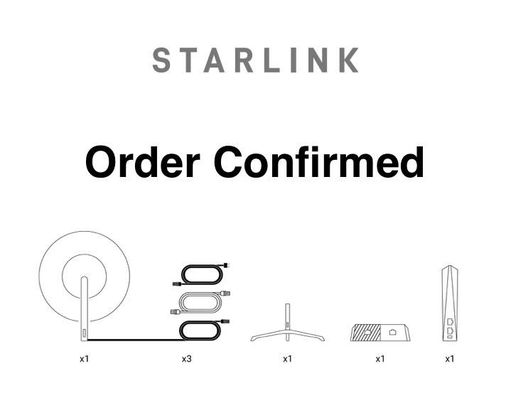 Elon Musk’s SpaceX recently opened up its Starlink satellite internet pre-orders to everyone, on a first-come, first-serve basis.

Starlink is an internet service, powered by a constellation of low-earth orbit satellites. Given their lower orbit at 550 km above Earth (compared to traditional satellite up about 35,000 km), Starlink brings faster download speeds and lower latency, opening up video conferencing, online gaming and 4K video streaming.

You can read about a recent online gaming test with Starlink internet here.

The satellite internet service is targeting rural areas right now with its ongoing beta, available to users in the U.S., Canada and the UK.

With rural Canadians paying for some of the most expensive internet and ridiculously slow download speeds, Starlink is a gift from the heavens.

One Bell customer emphatically expressed their excitement with their recent Starlink order confirmation, by saying, “just preordered Starlink for my family and I: Bell Canada can now s*ck my nuts.”

The Reddit thread then snowballed into other rural internet users, sharing what they’re paying for and the speeds received. Here’s a collection of comments below:

Starlink pricing for Canadians is as follows:

As for averages speeds, downloads are at about 150 Mbps download and upload at 25 Mbps, give or take. Elon Musk has said the company plans to charge the same price everywhere for Starlink.

Starlink has no bandwidth limit and the system benefits from over-the-air software updates. SpaceX recently sent out an update to increase the heating element of the Starlink dish, to melt snow better.

Last November, the government of Canada announced it had signed a $600 million CAD deal with Ottawa-based Telesat, for the latter’s own low-earth orbit satellite internet to serve rural Canadians. Maybe that money should have gone to SpaceX and Starlink instead.

Telesat announced this week it signed with French-Italian space hardware maker, Thales Alenia Space, to build 298 internet satellites, set to however at 1,000 km above Earth, almost twice the height of Starlink satellites.

If we count 24 months from now, SpaceX would have theoretically launched another 2,880 Starlink satellites into orbit, at the company’s launch rate of 120 satellites sent into space each month (each launch sends 60 satellites up at a time).

It’s clear traditional internet service providers are taking notice of the rise of Starlink. Recently, Bell announced it was set to fast-track its broadband fibre and wireless network rollout, by spending $1 billion.