Tesla Releases Cyberquad Electric ATV for Kids in the U.S.

Tesla has just launched its latest Cybertruck-themed accessory in its online store, the $1,900 Cyberquad for Kids (about $2,436 CAD), an all-electric version of the ATV available for shipping exclusively in the U.S. (via Tesla North). 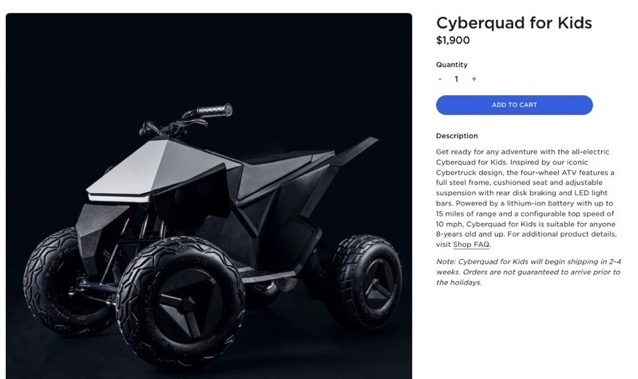 The company says Cyberquad for Kids will start shipping in 2-4 weeks and that orders are not guaranteed to arrive before the holidays. Moreover, Cyberquad for Kids can only be shipped to the 48 states of the continental United States, because it weighs 122 pounds and ships by FedEx Ground.

“Get ready for any adventure with the all-electric Cyberquad for Kids. Inspired by our iconic Cybertruck design, the four-wheel ATV features a full steel frame, cushioned seat and adjustable suspension with rear disk braking and LED light bars. Powered by a lithium-ion battery with up to 15 miles of range and a configurable top speed of 10 mph, Cyberquad for Kids is suitable for anyone 8-years old and up.”

The max weight for Cyberquad is 150 pounds and is for kids ages 8 and up. It has the following three speed settings: 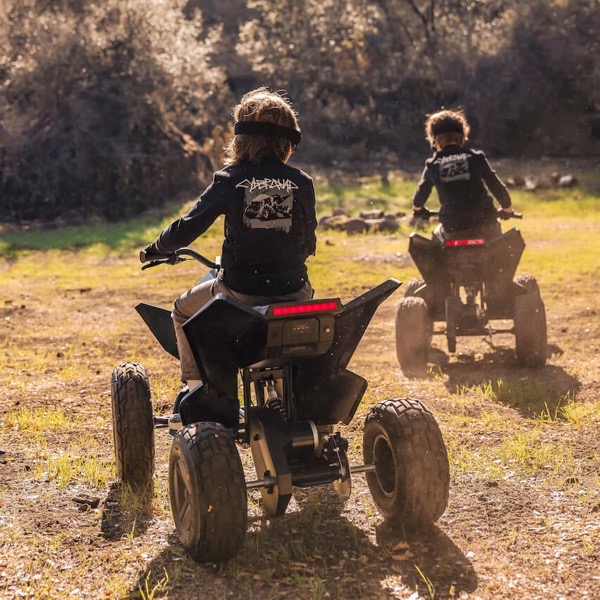 “Out riding with the kids on the Cyberquads! So much fun for kids and adults!”, Tweeted Tesla’s design chief, Franz von Holzhausen.

Tesla says the Cyberquad for Kids is made by Radio Flyer and it comes with a 1-year warranty. Check out the promo video below and tell us what you think in the comments section.