With the Model S previously falling short of earning the top award and Model X never being tested by the nonprofit group, the Model 3 has finally earned Tesla its first “top safety pick +” award from the Insurance Institute for Highway Safety (IIHS), The Verge is reporting. 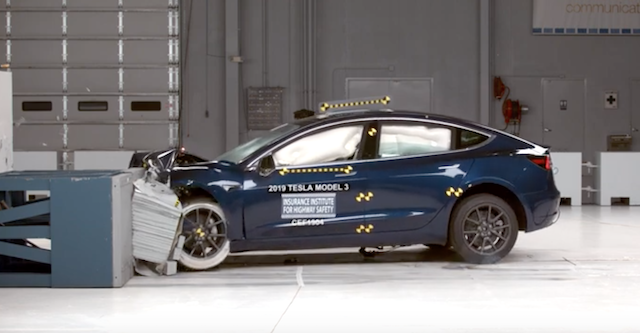 “The safety of our customers is what matters most, which is why our active safety features and passive safety equipment come standard on all of our cars,” wrote Tesla in a blog post.

After Audi’s E-Tron, the Model 3 has become the world’s second electric car to earn the honour, receiving “good” ratings in all categories which is the best distinction the IIHS gives out. According to IIHS, Tesla’s automatic emergency braking system performed quite well in avoiding collisions in both its 12 mph and 25 mph tests.

The car only slightly fell short of the highest rating in two categories.

IIHS said that pre-June 2018 versions of the car only had “acceptable” headlights. And on all models, the group said there’s a “moderate risk of injury to the left lower leg” of the driver in head-on crashes that overlap with the driver’s side of the vehicle (which IIHS says is one of the most challenging tests).

You can check out full results and videos of IIHS’s test of the Model 3 at this link.