According to a leaked release note for Tesla’s upcoming software update, the company is planning to introduce a new single-pedal driving feature that will help improve the vehicle’s range. 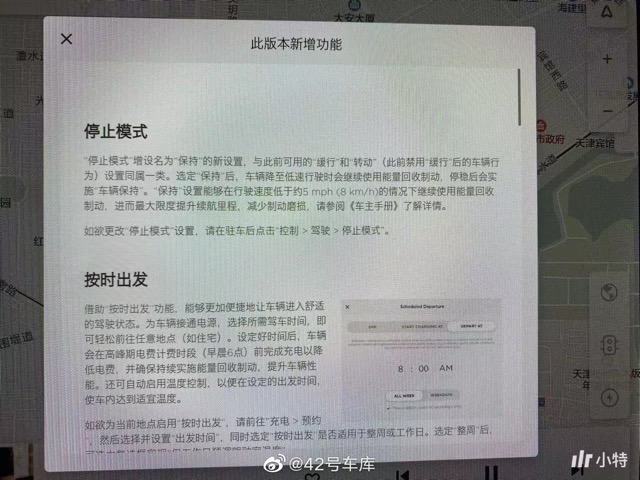 During Tesla’s recent earnings conference call, CEO Elon Musk also noted that an upcoming over the air software update will bring single-pedal driving that will help improve range, along with some additional improvements in comfort, feel, charging speed, and overall driveability.

When a Tesla driver takes their foot off the gas pedal, regenerative braking slows the vehicle down–acting as a decelerator–while harnessing braking power to recharge batteries. With single-pedal driving, Tesla says users will be able to now slow to a complete stop with regenerative braking, instead of the previous 5 mph limit.

The leaked release note (pictured above) has been shared by a Redditor from China and apparently reveals details regarding the upcoming single-pedal driving, as well as a feature that allows users to schedule charging stop time.

Below is how he translates the features will work:

1. In Driving section, there is a new option called Keep/Hold.
When it’s ON, it will allow regen to work till ~0mph (maybe with a little brake), along with AutoHold enabled when the car is stopped.

Originally regen only works till 5mph. Therefore the range can be improved.

2. You can set a specific time to stop charging! You can also let A/C be ready at that time.

The software update is expected to begin rolling out in the next few weeks.

As reported by the folks over at Tesla North, Tesla delivered its first production electric truck to the customer, PepsiCo, at its Semi delivery event on Thursday evening at its Gigafactory in Sparks, Nevada. At the event, CEO Elon Musk was also available for a presentation alongside Dan Priestley, Senior Manager, Semi Truck Engineering. Musk...
Usman Qureshi
7 days ago