Tesla lists seven Superchargers locations pegged for Saskatchewan on its website, but now it appears two more may be coming that are not listed, specifically in Davidson and Whitewood.

The first Tesla Supercharger began construction in Moose Jaw back in June, while the Moosomin location was approved by its city council earlier this spring.

Other locations coming include Chaplin, Maple Creek, Regina, Swift Current and Wolsely, according to Tesla’s website. But according to the Saskatchewan Electric Vehicle Association (SEVA), they claim another location is coming to Davidson.

“Psssst. The coop gas bar beside highway 11 in Davidson. Tesla is/has been negotiating supercharger at that location,” said SEVA on August 12.

As for the location in Whitewood, earlier this month SEVA said “Another top secret Tesla supercharger location has been spotted at Whitewood Saskatchewan by a SEVA member,” while sharing photos of a location showing a charger installation and one electrical box with a tag noting “Tesla Whitewood”. 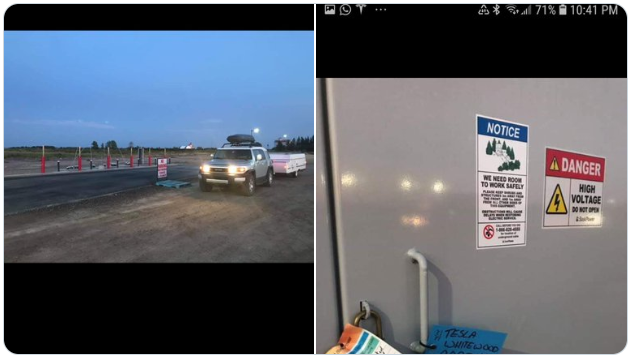 The Whitewood location, if indeed real, sits 51.1km from the planned Supercharger in Moosomin.

As for Davidson, it would be a natural stop in the mid-way point from Moose Jaw (planned charger coming) to Saskatoon, despite being off the Trans-Canada Highway.

Tesla CEO Elon Musk was called out on stage during the company’s Model Y presentation, regarding Superchargers in Saskatchewan. Musk confirmed Superchargers would be coming soon for the province, part of the company’s goal to create a charging network across Canada.