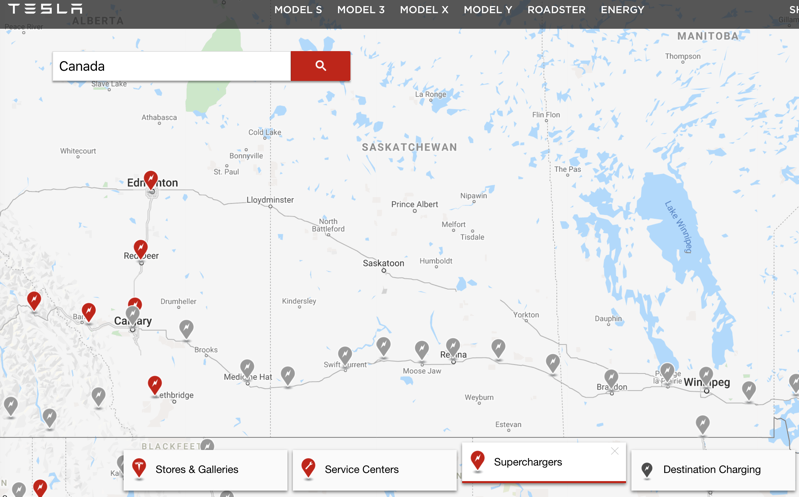 The first Tesla Supercharger in Saskatchewan has started construction, marking the first time a Supercharger location will launch in the Prairies.

The Tesla Supercharger will be located in Moose Jaw, at The Civic Centre Plaza, at 1251 Main St. North. Construction of the Supercharger was spotted by a couple of members of the Tesla Motors Club.

Back in the fall of 2017, Tesla announced 58 more Canadian cities would see Supercharger stations, making it possible for drivers to travel across the country on the Trans-Canada Highway. Tesla said additional Superchargers would appear in Saskatchewan, Manitoba, New Brunswick and Nova Scotia.

Check out the video below of the Moose Jaw Supercharger location under construction:

New Brunswick already has three Tesla Superchargers online since that announcement in 2017.

Tesla’s website says the Moose Jaw Supercharger has a “target opening in 2019”, with “exact timing and specific location may vary.” The location has been determined, now it’s a matter of waiting for construction to complete.

Other Supercharger locations coming soon to the province include: Chaplin, Maple Creek, Moosomin, Regina, Swift Current and Wolsely. Including Moose Jaw, Tesla will have seven Superchargers in Saskatchewan.

Tesla CEO Elon Musk has a connection to Canada and Saskatchewan, previously noting his grandmother was from Moose Jaw. During the company’s Model Y reveal, Musk also reassured the crowd Superchargers would be coming soon to the province.

My grandmother was from Moose Jaw