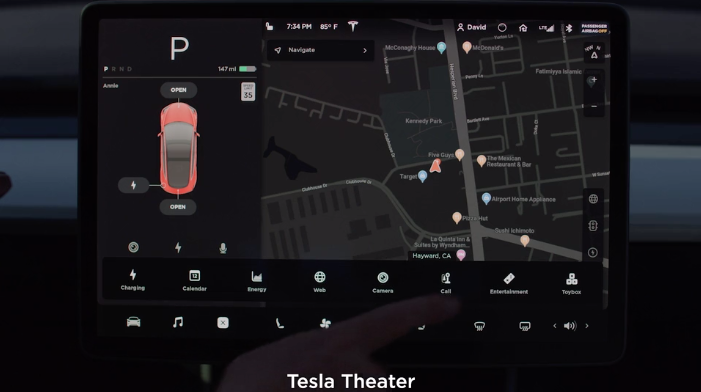 Earlier this week Tesla released its version 10.0 software update for its electric vehicles in the United States, but there was no word on Canadian availability.

That has changed, as numerous Tesla owners in Canada are reporting they are now seeing the V10 software update, as of Saturday, September 29, 2019.

iPhone in Canada reader ‘3Stacks’ let us know version 32.11 was released yesterday in Canada, bringing with it the V10 update, but lacking Smart Summon.

For those with Full Self-Driving Capability or Enhanced Autopilot, Smart Summon “can enable their car to navigate a parking lot and come to them or their destination of choice, as long as their car is within their line of sight,” explains Telsa. Transport Canada most likely has not approved the feature for use here, yet.

Other Canadians who received the update are also showing off V10, which brings Tesla Theater, adding Netflix, YouTube, and Hulu and Hulu + Live TV accounts (USA).

Guess I’ll be watching TV in the car from now on because the audio sounds amazing. Loving the new V10 update so far! Even without smart summon in Canada at the moment, it sets the car so far ahead in terms of features. @tesla #Model3 pic.twitter.com/x7LhHr475K

Also new is “Car-aoke” feature for singing along, new “I’m Feeling Lucky” and “I’m Feeling Hungry” navigation features, to go with Spotify Premium support for listening to music and podcasts.

For Tesla Arcade, the game Cuphead is now available with USB controller support, while Sentry Mode recorded clips can now be stored on your USB drive.

Tesla says it also is enabling browser access for all Model 3 Standard Range Plus and Standard Range vehicles, and also streaming media support for Spotify, TuneIn, and Slacker over Wi-Fi for the Model 3.

The electric carmaker previously released version 9.0 of its software update just under a year ago, back in October 2018.

“Version 10.0 is our largest update ever, and is yet another example of how Tesla ownership continues to get better over time,” explained Tesla.