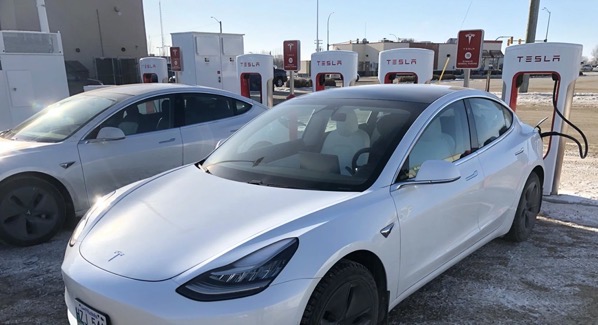 Tesla continues to turn on more Superchargers in Canada, with its latest in Portage la Prairie in Manitoba.

Yesterday, we told you four Tesla V3 Superchargers went online in Ontario—marking the first V3 versions in Canada, capable of peak charges rates of 250 kW, or 1600km per hour.

The Portage la Prairie Tesla Supercharger went online yesterday as well, confirmed by members in the TMC Forums. There appears to have been a flick of the switch to enable five V3 Superchargers in Canada yesterday.

This latest Tesla Supercharger is located at 2100 Saskatchewan Ave W, in the Sobeys parking lot, across from Dollarama.

Back in September, Tesla confirmed at the time 26 of the 46 Superchargers being built along the Trans-Canada Highway are V3 models, capable of faster charge rates and thusly allowing for fewer waiting times for owners.