Apple was the only smart wearables vendor to post a decline in the second quarter of 2016 compared to a year ago, according to the International Data Corporation (IDC) Worldwide Quarterly Wearable Device Tracker.

Apple Watch sales were down 56.7% year-over-year, while iPhone sales grew, according to Kantar, as IDC estimates the shipment of only 1.6 million units compared to the 3.6 million the tech giant allegedly shipped in the second quarter of 2015, when the Watch first hit the market. 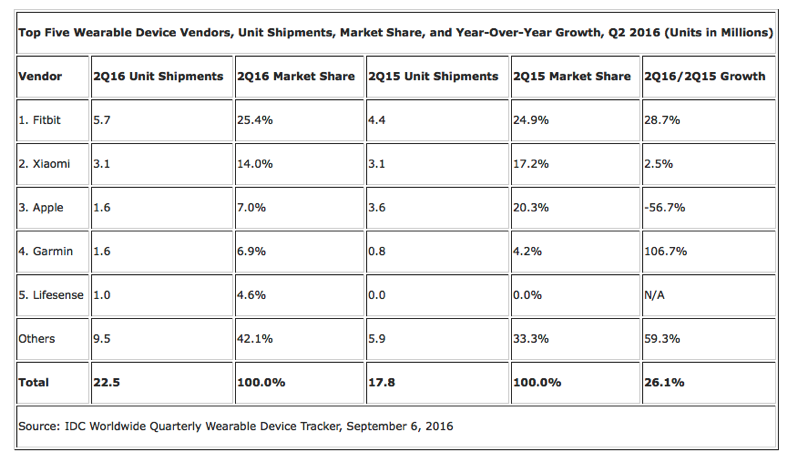 The problem seems to be that Apple didn’t push out a new model on the anniversary of its first-generation Watch, IDC says. Even the discounted price of the Sport model wasn’t much help for the company’s second quarter sales of the wearable, it appears.

Apple still managed to grab third spot in the top five wearable device vendors list compiled by the IDC, however. In the top spot we find Fitbit with an estimated 5.7 million unit shipments, 25.4% of the global market, followed by Xiaomi with 3.1 million units and 14% of the market.

Due to low shipments, Apple has lost significant market share and now controls only 7% of the global market, which compares to 20.3% a year-ago.

Overall, shipments of wearable devices reached an estimated 22.5 million in the three-month period ending in June, and the market grew 26.1% year-over-year, according to IDC.