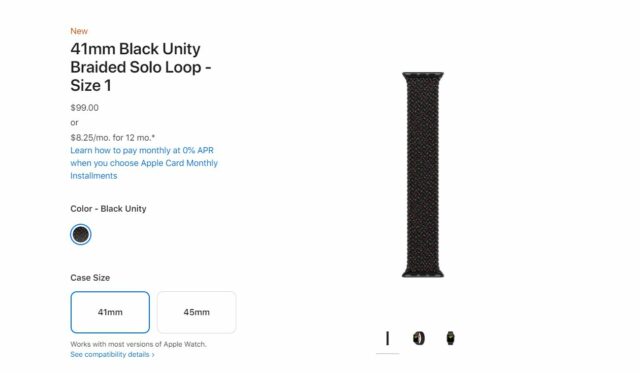 The new Solo Loop, designed by Black creators, celebrating Black History Month is now available. Looking at the Canadian site, the Black Unity Braided Solo Loop is listed at $119 CAD. It can be ordered online or via the Apple Store app. Though, it will only be available for a limited time.

The description of the Solo Loop reads:

“Inspired by Afrofuturism, the new Black Unity watch band and matching Unity Lights watch face symbolize the necessity for a more equitable future for the present generation of Black people.”

The Black Unity Braided Solo Loop features the colours of the Pan-African flag. On the Loop’s lugs, the words “Black Unity” are laser-etched onto it. On top of an inspired design, Apple has released a new Unity Lights watch face that changes colour throughout the day.

The watch face can be downloaded on any Apple Watch Series 4 or later. As long as it is running watchOS 8.3 or a newer version of the software. Similar “Afrofuturism‑inspired” designs are also made available on Mac, iPad, and iPhone.

In prior years, Apple has used Black History Month as a way to shine the spotlight on Black creators and visionaries across consumer tech, music, and entertainment. Given that the month has just started, it’s expected we’ll see more initiatives pop up in due time.