Even though it lets you can make voice calls, talk to Siri, and track your fitness, there are still features missing from the newest Apple Watch. Now, however, one company has developed an amazing add-on to that could radically change the way the watch is used. 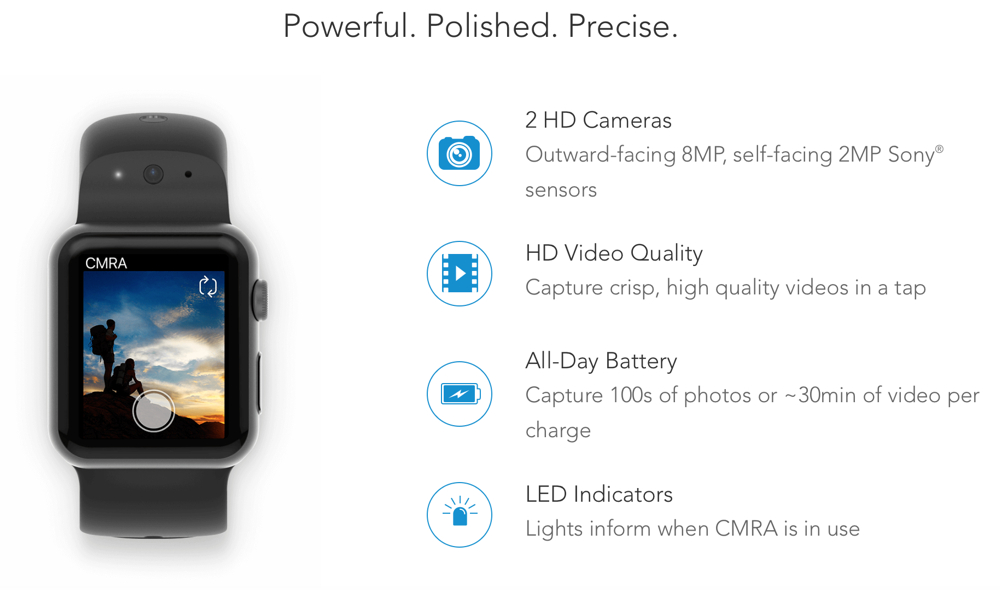 The CMRA watch band from messaging app maker Glide packs an 8-megapixel and a 2-megapixel camera into a watch band so you can capture higher-resolution images and video from the outward facing strap and decent selfies and video with a camera above the watch face, according to a report from Recode.

It’s a handy update for those who’d prefer video chatting and snapping photos without taking out their phone. Accessories like this also bring us one step closer to being able to replace smartphones entirely with wrist-worn devices.

The wristband accessory, operated through the CMRA app, could last as long as your Apple Watch lasts on a charge, and holds enough power to let you take 100 pictures or shoot about half an hour of video. Those image and video files can be stored on your iPhone or in the cloud, or shared directly with Facebook, Twitter, YouTube and the Glide messaging app. The wristband itself is both Bluetooth and WiFi enabled.

When the accessory ships this spring, the band will come with two battery packs and a charger that charges both your Apple Watch and the band at the same time, Glide says. The CMRA band is currently available for pre-order for $149, but when those units run out it will retail for $249.

Glide says it’s making the wristbands available to app developers ahead of the release to consumers, giving other companies a chance to expand the CMRA’s capabilities. Check out the announcement video below: