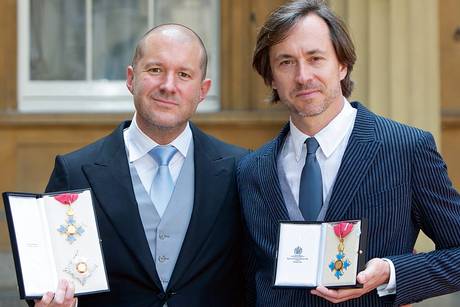 Eight months ago Apple announced an important talent acquisition just ahead of the iPhone 6 and Apple Watch event: Jony Ive’s longtime friend Marc Newson joined the company. Although the two have made public appearances since then at various times (and before that), Newson had been keeping mum about his work at Apple. Today he broke the silence: The London Evening Standard profiled the designer in a lengthy article in which Newson talks about his role at Apple and reveals the company’s possible future focus.

Ive and Newson started working on watches a long time ago, he reveals to the Evening Standard reporter John Arlidge. “It started long before the launch of the Apple Watch”, he says with an Australian twang.

Three years ago he and Ive collaborated to create a customised Jaeger-LeCoultre Memovox watch for an auction of their favourite objects to raise funds for RED, the charity set up by U2’s Bono to fight AIDS. It was Ive’s first watch but one of many for Newson. In the 1990s, he founded a company called Ikepod that made a few thousand watches. Ikepod and the Jaeger-LeCoultre collaboration ‘led Jony to the conclusion that it might be a good thing to get me involved on the Apple Watch,’ says Newson.

Since the launch of the Apple wearable, tech journalists have started talking about Apple’s transition from a technology company to a luxury lifestyle firm. The top-of-the-line Apple Watch Edition is the first step toward this transition.

However, traditional luxury watch companies have dismissed that, saying that Apple’s timepiece is too cheap to sell as a luxury product. When it was launched, Tag Heuer boss Stéphane Linder sniffed: “Luxury is about being unique and rare. At $350, it looks more mass market.”

Newson retorts: ‘There are a lot of Louis Vuitton bags out there. I think at one point every 1.5 Japanese woman had a Louis Vuitton bag. But it still qualifies as a luxury object. It’s about the quality and integrity of the product.’

And there is another major reason to question the Apple Watch’s luxury status: These watches might be outdated in just a couple years (software just accelerates that). True luxury, on the other hand, stands the test of time.

Long silence. ‘The way I see it, it’s evolution, progress,’ Newson recovers. ‘And we are doing wonderful things. In one of the versions of the watch, the box it comes in acts as a charging device that you can use for other models. So it becomes a useful object and not something that will just sit in the top drawer of your cupboard for the rest of eternity.’

Newson spills gas on already existing iCar rumours. The journalist points to Newson’s experience with cars, and that both Ive and Newson own several hundred thousand pounds’ worth of mainly classic Aston Martins, Lamborghinis, and Bentleys. “Newson does little to damp down the speculation: ‘There is certainly vast opportunity in that area to be more intelligent.’”

The whole interview is well worth your time. To read it in full, hit the following link.

YouTuber and tech gore creator TechRax took it upon himself to give Apple's new iPhone 14 Pro a facelift in a recent video. "I can't stand the protruding camera bump," he said, preparing to saw it off. The camera island on the back of this year's iPhone 14 Pro models is larger in all directions than the...
Nehal Malik
24 hours ago