Angry Birds Star Wars App Review: The Force Is Strong With This One 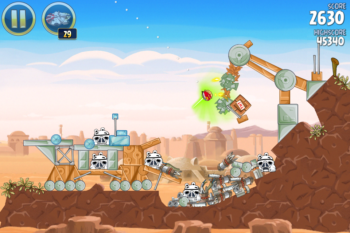 Angry Birds Star Wars is the Angry Birds game you’ve been looking for.  The Birds can now use the Force, lightsabers and blasters to help you destroy those Imperial Swine.

Levels are set in locations from the Star Wars movies, such as Tattooine and the Death Star, and are in the style of both the original Angry Birds, and Angry Birds Space. All the birds and pigs have been changed to resemble Star Wars characters, which really changes how you play the game. For example, the Red Bird was only good for knocking objects over, but now as the Luke Bird, he can cut through objects and Pigs with his lightsaber.

I found getting one star on any level to be pretty easy. However, if you want a greater challenge, the $1.99 Path of the Jedi levels are for you. The only issue I had with this game is the camera. If I moved the camera at the start of a level, it would pan to the right, sometimes causing me to misfire a Bird. I needed to wait a few seconds in order to get full control of the camera. 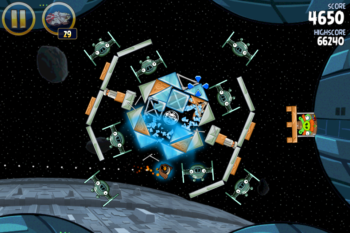 I really enjoyed playing Angry Birds Star Wars. The combination of the music, character design, level design and abilities of each character really make this game feel like Star Wars. I think this is the best Star Wars game available on the App Store.

If you like Angry Birds, Star Wars or both, give this game a try. You can download it for 99 cents here; then tell us what you think.

May the Force be with you. Did you buy Angry Birds Star Wars (don’t be ashamed)?