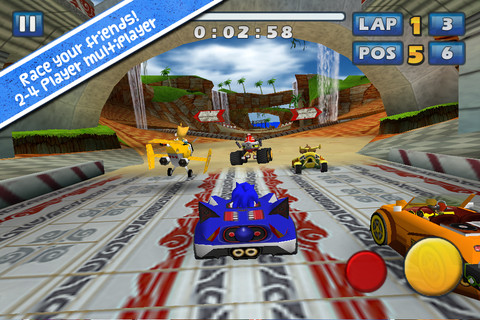 Every week Apple features an “App of the week” and makes it free to download. This week’s app is Sonic & SEGA All-Stars Racing. This is a fun little racing game in the style of Mario Kart, but using characters from the Sega universe. Gorgeous graphics and fun games play make this an easy free download. There is a single player mode, as well as a 2 – 4 multi-player mode. You can even play this right on your tv via AirPlay and an Apple TV, or with the dock connector to HDMI adaptor.

The world’s fastest hedgehog, Sonic, and the SEGA All-Stars are zooming on to your iPhone and iPad for the ultimate party racing showdown. Race as your favorite character across 16 white-knuckle courses in a frantic race to the finish line.
Stay ahead of the pack by dodging traps, firing missiles and, if all else fails, wreaking havoc with your All-Star moves! Whether racing on your own, or battling it out with friends, anything can happen in this crazy competition where winning is only part of the fun!

MEET THE ALL-STARS
Race to the finish as one of 12 iconic SEGA characters and take to the track by car, monster truck, bike, plane and even a banana! Each vehicle has unique handling characteristics, and each character’s All-Star move will speed you to victory!

START YOUR ENGINES
Rev up your skills with 25 missions then outrun the competition in three Grand Prix Cups. Not satisfied yet? Hand out a glove slap and demand satisfaction in the dueling Battle Mode!

TWO’S COMPANY, BUT FOUR’S A PARTY
Challenge a friend over local Bluetooth or go head to head with up to four players online. Party like the All-Star that you are!

HEY MA, I’M ON TV
Now you can play Sonic & SEGA All-Stars Racing on your TV with the Digital AV Adapter from Apple or an Apple TV. Supports iPhone 4S, iPad 2, and newer devices.

Sonic & SEGA All-Stars Racing is Apple’s App of the Week, and is a free download right now. It is compatible with iPhone, iPod touch and iPad, and requires iOS 3.1.2 or later. Get it now!