Apple Clarifies the Description of ‘Apps for Passbook’

Passbook in iOS 6 has become one of those apps that may be confusing for users because there are no clear instructions provided on how to use the app. Essentially, Passbook is a repository for tickets, coupons, passes and other items you need quick access to, which will appear based on integration from supported apps.

We’ve previewed how Passbook works for Cineplex Mobile and recently Porter Airlines jumped into the Passbook arena (Starbucks will soon too).

Apple has updated the App Store description page for Passbook apps with the following, as noted by ourselves and others:

Passbook is the simplest way to store your boarding passes, tickets, coupons, gift cards, and more in one place. With Passbook, you can scan your iPhone or iPod touch to check in for a flight, get into a movie or redeem a coupon. Wake your iPhone or iPod touch, and passes appear on your Lockscreen at the appropriate time and place. Explore our collection of apps that work with Passbook and check back often as new partners will be added regularly.

You will find this page when you tap on the link to the App Store at the bottom of the Passbook app: 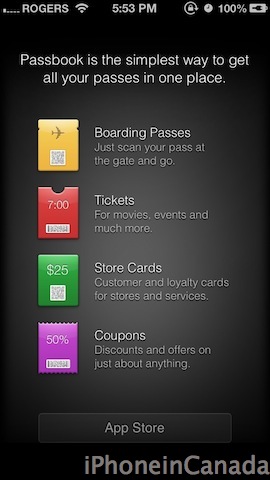 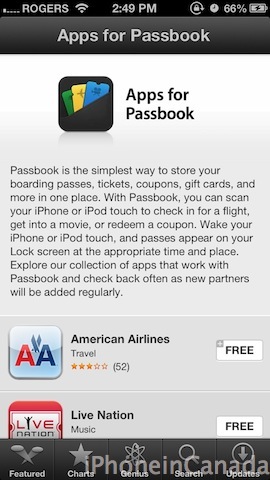 Until we see more apps updated to include Passbook functionality, the feature will be limited to the apps listed in the App Store such as Live Nation, Ticketmaster, United Airlines and American Airlines to name a few. Have you tried Passbook yet?