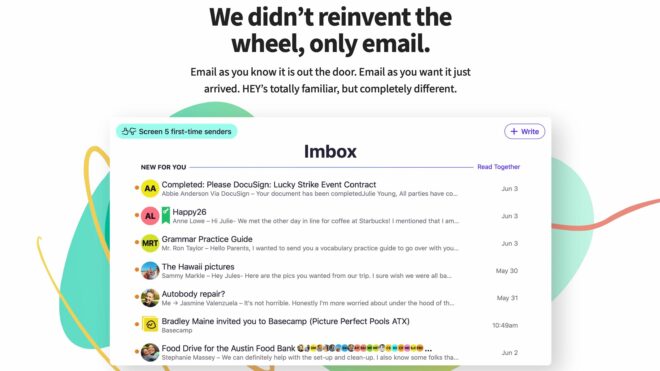 ‘Hey’ is an email app that costs $99 per year to use, from the founder of Basecamp. The company this week shared how Apple refused to approve its recent iOS update, despite being approved in the App Store. The ‘Hey’ app requires a user to have a paid subscription before the iOS app can be used. Apple says an in-app subscription model would have to be followed for the app to continue.

The saga set off a firestorm ahead of Apple’s annual developer conference, WWDC20, set to take place next Monday. It also comes at a time when Apple is under scrutiny in the EU over its App Store over allegations of antitrust.

“Sitting here today, there’s not any changes to the rules that we are considering,” Schiller told Panzarino, adding, “There are many things that they could do to make the app work within the rules that we have. We would love for them to do that.”

In Apple’s point of view, with the Hey app, “You download the app and it doesn’t work, that’s not what we want on the store,” said the SVP. For this reason, the app should follow App Store rules and offer in-app purchase functionality, as would be the case for the Hey service if it were elsewhere.

“We didn’t extend these exceptions to all software,” said Schiller, but “Email is not and has never been an exception included in this rule.”

Schiller also revealed the Mac version of the Hey app was similarly rejected for the same reasons as the iOS counterpart—which was approved in error.

The email app should have offered a free or paid version in the App Store, then offer an in-app purchase version to unlock the full service as available on the Hey website, as one proper way to go, says Schiller.

Apple also shared a letter the company sent to the founders of the Hey email app, with part of it saying, “We are happy to continue to support you in your app business and offer you the solutions to provide your services for free — so long as you follow and respect the same App Store Review Guidelines and terms that all developers must follow.”

Reaction to the latest rejection from the Hey founders can be read below:

Apple doubles down on their rejection of HEY in the App Store, but adds some spice to it at the end: YOU UNGRATEFUL PEASANTS! No mention of how Basecamp differs, how Gmail differs, how Outlook differs, how Fastmail differs. Just more edicts from the monopoly king! https://t.co/1TFYHSgAJt

Also, I love how Apple sent this to a bunch of journalists before this even landed in Jason's inbox. Nice.

Apple takes a 30% cut from developers as a cost of doing business when it comes to in-app purchases, with this dropping to 15% in the second year. Apple is making it clear to the developers of Hey they need to follow the rules if they want to play ball in the App Store.