We have heard ongoing stories about parents dishing out iPads to their kids, only to be surprised when ‘accidental’ in-app purchases occur (like spending $1500 CDN on virtual donuts). The Guardian now reports Apple has implemented a small change to all paid and freemium apps within the App Store to add the line “Offers In-App Purchases,” which can only be seen within iTunes at this moment in time.

Apple told The Guardian this change makes it easier for people to know about possible purchases within apps in advance:

Apple confirmed to The Guardian that the message is a new addition to the App Store. Its location – directly below the icon and “Free” button on each app’s page – makes it even easier for people to identify that an app uses in-app purchases (IAP) before downloading it. 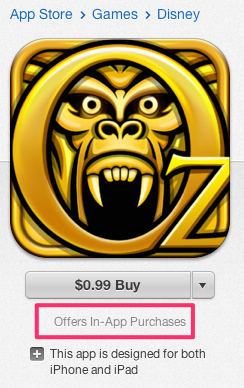 For the savvy parents out there, you probably have already turned on restrictions for in-app purchases in iOS settings. How to get there? Easy: