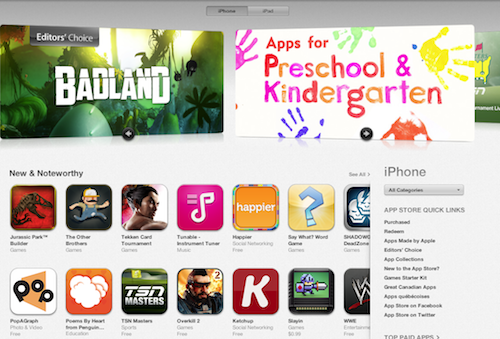 The App Store, Google Play, the Windows Phone Store, and BlackBerry World downloads rose 11% in the first quarter of 2013 compared to the holiday quarter of last year, reaching 13.4 billion, while revenue from paid apps, in-app purchases, and subscription reached $2.2 billion, according to the latest Canalys study (via Fortune).

Interestingly, though, the biggest increase in downloads was recorded by Google Play, as the Android app storefront accounted for about 51% of the stores’ collective download total. This was followed closely by the App Store.

But the increase in downloads didn’t help Android developers in their mobile monetization process: As the Canalys study points out, Apple’s App Store accounted for “the largest indexed proportion of revenue between the four stores at around 74%.”

‘Apple’s App Store and Google Play remain the heavyweights in the app store world. In comparison, BlackBerry World and the Windows Phone Store remain distant challengers today, though they still should not be ignored,’ said Tim Shepherd, Canalys Senior Analyst. ‘Each of these four stores represents a different market proposition for developers, and remains the primary outlet to reach users on the platforms they serve. BlackBerry and Microsoft particularly need to continue to proactively work to attract fresh, innovative content and services to their respective catalogs, and fill gaps in their inventories. But they also need to increase device sales around BlackBerry 10 and Windows Phone 8 to increase the addressable market opportunities on offer to developers.’

South Africa, Brazil and Indonesia have recorded tremendous growth, driven by the fast adoption of smart devices in these emerging countries. But robust growth was recorded in mature markets as well, with North America rising 8% and 6%, and Western Europe 8% and 10%.