Apple has withdrawn an iOS application from the Chinese App Store claiming the app includes content that is illegal in China, reports the Financial Times. 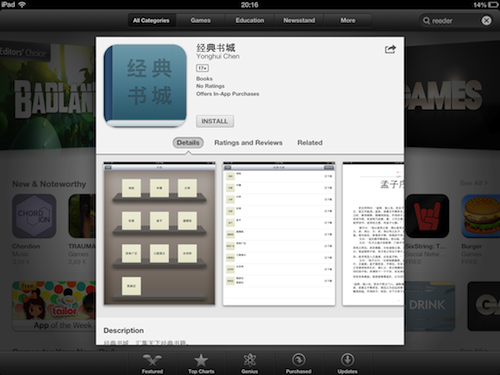 Contacted by FT, the developer, Hao Peiquiang, said he received a notification from App Review that his bookstore app ‘jingdian shucheng’ will be removed from the China store because it violates the App Store Review Guidelines, which say, “apps must comply with all legal requirements in any location where they are made available to users. It is the developer’s obligation to understand and conform to all local laws.”

Hao says the background behind Apple’s move is the inclusion of three books by writer Wang Lixiong, who’s work is banned in China. The app is still available in other countries, though.

Wang, on the other hand, was more direct, and informed the Financial Times that the decision “must be because of political reasons.”

The news comes hot on the heels of Apple’s public letter of apology signed by Tim Cook, as a reply to attacks from the country’s media, which could signal that the company has adopted a more cooperative working relationship with its second-biggest market’s authorities.