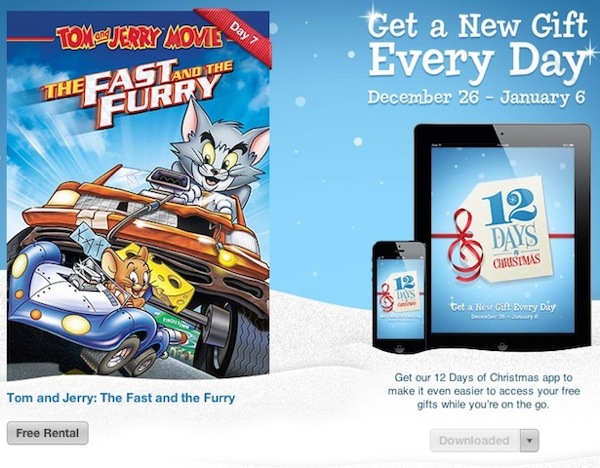 Day 7 of Apple’s 12 Days of Christmas promotion is here and up for grabs is a free movie rental kids (and some adults) will enjoy–Tom and Jerry: The Fast and the Furry. The movie rental is regularly priced at $9.99 and was released in 2005:

Tom and Jerry enter the “Super Race,” an extreme reality show in which the contestants compete in an all-terrain car race around the world, to win the grand prize of an ultra dream mansion! They compete against a hot rod Granny and her unusual dog, a super genius who has tough luck, a soccer mom with a tricked out mini-van, and many other crazy characters. The fun and chase is on, as cat and mouse topple the Eiffel Tower, crack the Great Wall of China and re-face Mount Rushmore as they battle for the ultimate prize!

The widescreen movie runs 1 hour and 14 minutes and is available in both HD and SD downloads, 2.35GB for the former and 927MB for the latter.

Jerry was quoted in the movie*:

I live my life a quarter mile at a time. Nothing else matters: not the mortgage, not the store, not my team and all their bullsh!t. For those ten seconds or less, I’m free.

Click here to rent Tom and Jerry: The Fast and Furry.

*Not an actual quote from Jerry, but from Dom of course.