Apple has been running their free ‘App of the Week’ promotion in iTunes and this week we have one of the best panorama photography apps chosen–360 Panorama by Occipital. This app makes it incredibly easy to take up to 360 degree panoramas, taking full advantage of the iPhone’s gyroscope.

All you have to do is pan your iPhone and it starts snapping and stitching images in real time. Once images are finished you can easily share them to social networks or save them to your Camera Roll:

Take stunning 360 panoramas everywhere. 360 Panorama turns your iPhone, iPod Touch, or iPad into a full featured 360 degree panoramic camera. Easily capture immersive panoramas in seconds and instantly share your 360 view with the world. Simply pan the camera and watch as images are stitched seamlessly. 360 Panorama captures the scene in a way you never could with a traditional camera. 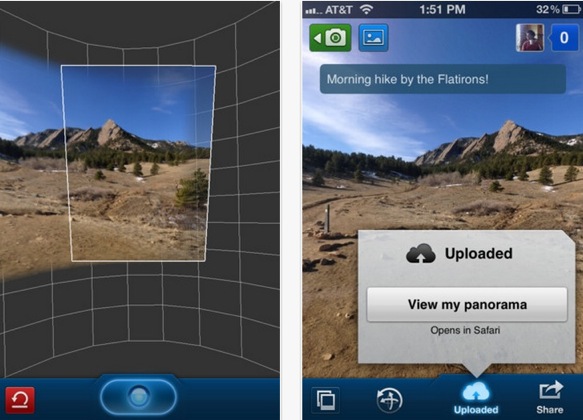 This is by far my go-to app for creating quick panoramas. Nothing much else to say but to download this while you can.

Click here to get 360 Panorama from the App Store. It’s regularly priced at $0.99. Let me know what you think!