Broadcast your GoPro to iOS with Livestream’s Latest Update

A freshly released update of the Livestream iOS app makes adrenaline junkies — users of GoPro cameras — part of the live TV experience: Starting today, they can now connect their iPhones to the GoPro camera and start streaming their actions right away (via CNET). 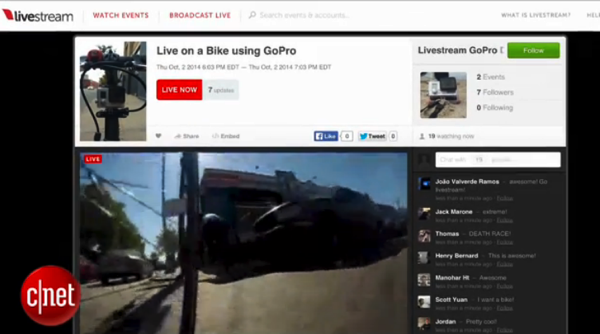 “We’ve received hundreds of requests to add this kind of capability. People try to hack it and live-stream GoPro to a computer, but obviously a computer is not an appropriate thing to carry in an action sport,” Max Haot, chief executive of Livestream, said in an interview.

“People are watching on Livestream because they want to be connected, they want to be there. What does it feel like to do a wing-suit jump and to see the jump at the same time?” said Haot. “It’s live TV, and it makes you feel part of it.”

Upon launch, the updated Livestream iOS app connects the user’s iPhone to the GoPro camera’s Wi-Fi network, and as long as the devices remain connected to each other and the iPhone has access to a 4G network, the broadcasters can live-stream their actions.

The first demonstration of this feature will be a livestream of co-founders Haot and Phil Worthington, who will be broadcasting their kite-surfing live from 10 a.m. PT to 1 p.m. PT today.