King Digital Entertainment, the company behind the ever-popular Candy Crush Saga game, became a public company today as it debuted on the New York Stock Exchange this morning at $20.50 per share (via TNW).

The Wall Street Journal, however, says that King originally planned to sell 22 million shares at a price of $22.50 per share, in the middle of the expected $21-$24 share price, as it values its business at $7 billion.

King has a portfolio of about 180 games, but the most renowned and widely adopted game is Candy Crush Saga, which accounts for roughly 80% of the company’s revenue. The game is popular on both iOS and Android, but now as a public company it needs to demonstrate that it can deliver other successful titles as well. The first trading day emphasized that, as KING closed the day down 15.56% at $19. 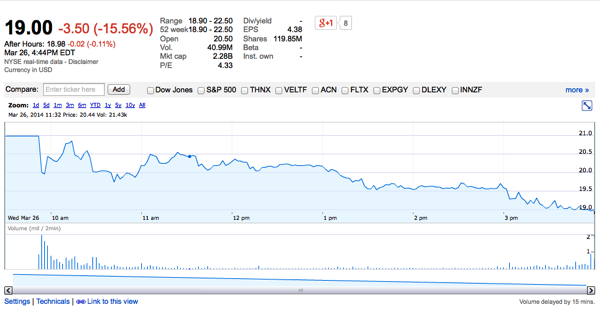 The company behind Candy Crush Saga originally filed for its IPO with the SEC last month, and it was listed starting today on the NYSE under the ticker “KING”.