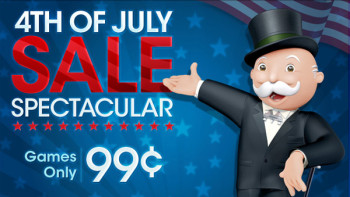 Electronic Arts has a history of reducing the price of their apps around holidays and this Fourth of July is no exception. Normal the newest titles aren’t put on sale but this time around every iPhone and iPad app is 99 cents or free, as announced on their blog:

This Independence Day, add more games to your celebration schedule with mega savings during EA’s 4th of July Sale Spectacular! For a limited time, EA games are just 99¢ (or free) – the lowest prices of the season.

Live the American dream and own it all with MONOPOLY on iPad or iPhone. Players can also experience the thrill of authentic championship racing with Real Racing 2. And that’s just two of the huge hits EA has on sale for under a buck.

I took this opportunity to purchase a few titles for my iPad, Monopoly, Scrabble and The Game of Life. With summer here it will provide plenty of entertainment on those days where it is too hot to go out or as a distraction for the kids on the long drives to the cottage.

Warner Brothers Games Are Also on Sale for $0.99!

Not to be out done, Warner Brothers followed suit and also reduced their catalog to 99 cents as well. I managed to pick up Batman Arkham City Lockdown. Another great app WB has included in the sale is Midway Arcade which includes ten classics from the golden days of the arcade. The included games include Spy Hunter, Rampage, Joust, Rootbeer Tapper, Defender, Arch Rivals. It also includes classic games such as Pool, Air Hockey, Arcade Basketball and Roll Ball.